SINGAPORE - An area is to be set aside where drones can be tested for maritime applications.

During the debate on his ministry's budget, Dr Lam said the estate will serve as a "regulatory sandbox" for the development of regulatory and safety standards for maritime drone operations.

"Its close proximity to an anchorage provides a conducive environment to test-bed and develop drone technology for maritime applications," he added, noting that companies such as maritime firm Wilhelmsen and aircraft manufacturer Airbus are already testing the use of drones to deliver goods from shore to ship.

This will help increase productivity and reduce manpower needs, compared to the use of boats for such deliveries currently, he said.

He was responding to Mr Sitoh Yih Pin (Potong Pasir), chairman of the Government Parliamentary Committee for Transport, who had asked about the Transport Ministry's plans to ensure Singapore's air and sea hubs would remain "relevant and competitive".

However, Dr Lam noted that potential safety and security threats could also arise from the errant and irresponsible use of drones, pointing to incidents where drones disrupted flights at London's Gatwick Airport as well as New Jersey's Newark Airport.

"To ensure that drones are operated safely, CAAS is also looking into strengthening the Unmanned Aircraft Regulatory Framework. This may include the mandatory registration of drones," he said.

Thursday's announcement comes a year after research and development hub one-north was identified as the Republic's first drone estate - where organisations can test the use of such unmanned aircraft in an urban environment - in February last year.

The use of drones is in line with the air and sea transport Industry Transformation Maps, introduced last year, which identified the harnessing of technology and innovation among their strategies, said Dr Lam.

He noted that ground handling firm Sats, supported by the CAAS, is also currently experimenting with the use of autonomous container trailers. 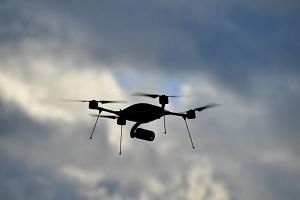 CAAS looking to develop system that can monitor drones islandwide

MPA to facilitate use of drones for ship surveys

As part of efforts to help small and medium-sized enterprises (SME) embrace technology, the MPA - together with the Infocomm Media Development Authority and Enterprise Singapore - will introduce a sea transport industry digital plan.

The plan will provide a guide on the various technologies available to SMEs at their different stages of growth and will be made available to ship agency and harbour craft companies at first, he said.

"SMEs can tap available co-funding government support when they adopt the list of digital solutions relevant for the sea transport sector for their digital journey," said Dr Lam, adding that more details will be provided when the plan is launched.

He assured air and sea workers that the Government will continue to support them in upgrading their skills, even as technology changes their sectors.

Later this year, the MPA will introduce an Earn and Learn Programme (ELP) for shore-based jobs in the ship owning, operating and broking sectors, he said, adding that the CAAS will enhance course fee support for the Passenger Service ELP to cover three additional modular certifications.