Mr Aloysius Ong, a student, was a passenger in his family car when they encountered the electric-powered scooter near Jalan Bukit Merah.

These vehicles are usually used as a mobility aid – helping the elderly or people with disabilities travel longer distances.

Traffic was heavy, and it was raining, Mr Ong told The Straits Times.

"He was hogging the whole road, and caused a traffic jam," said the 16-year-old.

Cars had to stop or trail behind the scooter, causing a jam. This continued for about 10 minutes, Mr Ong said.

After that Mr Ong's family's car went in a different direction.

Mr Ong estimated that the scooter was travelling at less than 20km per hour, and it appeared to be slower than an electric bicycle.

No one sounded their horn at the scooter, Mr Ong said, although one driver wound down his window to speak to the rider.

When shown photos of the mobility scooter on the road, Mr Denis Koh, chairman of Big Wheel Scooters Singapore, a community of electric scooter enthusiasts, said: "The uncle has clearly committed traffic offences."

Such scooters, which can travel at around 10kmh or less, are permitted on footpaths but not on roads.

The rider is wearing a "safety helmet" which is not approved for roads and the vehicle has no lights, Mr Koh pointed out. 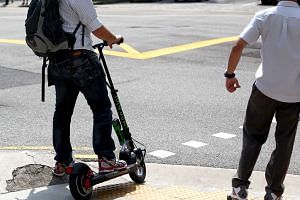 Mr Koh is part of a panel headed by the Land Transport Authority that is reviewing rules and guidelines for personal mobility devices on roads and footpaths.

He emphasised that there is a "need to educate and keep instilling a good scooting etiquette" in all users.

Besides electric scooters, the rules for devices from electric bicycles to unicycles will be looked at.

The rules are expected to be announced in mid-2016.