SINGAPORE - A redesigned MRT system map that has gone viral online is just the ticket, says the Land Transport Authority (LTA), although it will introduce its own revamped version later this year.

Architect Cliff Tan uploaded a redesigned map on Facebook on Monday (April 22) that features a cleaner and more rounded depiction of train lines.

The post quickly garnered widespread praise and has received around 5,000 reactions and a similar number of shares.

Some respondents provided feedback while a few urged the LTA to consider adapting Mr Tan's design.

An LTA spokesman told The Straits Times on Wednesday that a revamped MRT system map is already in the pipeline. "System maps are regularly updated to reflect the addition of new stations and lines as they become operational.

"LTA has revamped Singapore's MRT system map and it will be introduced in tandem with the completion of Canberra station and the first phase of the Thomson-East Coast Line later this year."

The spokesman added that the LTA is encouraged by the active interest shown by the members of the public in land transport and that inputs on signage-related matters can be lodged at www.lta.gov.sg/feedback 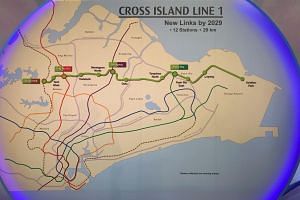 An LTA Facebook post on Tuesday praised Mr Tan for a job well done and asked him to consider approaching the authority.

Among Mr Tan’s fans was Workers' Party non-constituency MP Daniel Goh, who said in a Facebook post on Thursday that the map was “simply brilliant”.

Referring to how the map has impacted him, Dr Goh said: “I now see the city and country in quite a different light too, more contours, more textures, more character, more connections, not so flat and linear anymore.”

Mr Tan, 31, told The Straits Times that he had not expected such interest in his work, and that he had "never felt so much adrenaline in his life".

He had started work on the map about a year ago as a personal project.

Mr Tan moved overseas to study and work in 2010 and he found on his visits home that he was becoming more and more confused by the growing network of train stations.

"By the time I was back again last year, we had five lines and I was so overwhelmed that I spend almost the entire duration of all my MRT trips just glued to the train cabin wall, trying to take in and understand the map," he said.

"I found that the map lacks focus and I was unable to orientate myself to find my position in Singapore based on it, especially around town."

While he acknowledged that the original map designers had a difficult job on their hands, he was inspired to come up with his own version after coming across an alternative map from Italian designer Massimo Vignelli for the New York subway.

Mr Tan has now revamped his own design to address shortfalls pointed out by some netizens.

"I didn't expect to put so much effort into it, but I am sure all designers can relate with me," he added.

"When you start a design, you can't stop, it is like a big puzzle. It starts out fun, then you get stuck, but don't want to give up."