During the trial, commuters will be able to request pickups and drop-offs at any bus stop within a designated area through a mobile app.

LTA said the trial "will start with selected services with low travel demand during off-peak hours".

It added that details such as locations and operating hours will be announced later, but LTA had said last year that routes in Joo Koon, Punggol and Marina South were being considered. Regular buses will still be running on the routes selected, but at lower frequencies.

In response to queries from The Straits Times, LTA said that single-deck public service buses, which can typically carry up to 90 passengers and are currently operating on regular services, will be used during the trial.

"Upon booking an on-demand bus trip, the commuter will be provided with the bus registration number and a unique service number for easy identification of the assigned on-demand bus," said LTA.

A $2.26 million contract for the LTA trial was awarded to two firms - United States-based Via Transportation and local start-up Ministry of Movement.

In February, both firms won an initial tender of more than $460,000 to develop a dynamic routing and matching algorithm for the service.

The two firms will now develop hardware and software for the service. These include mobile apps for commuters and bus captains, tools for monitoring services, as well as operational and maintenance support for the system. They will also train bus drivers and support staff to operate the system.

According to LTA, the earlier algorithm developed by both firms demonstrated that the system can "optimise limited resources while offering more seamless and convenient bus journeys for commuters in areas or during timings with low or unpredictable ridership".

Via Transportation, which began operating in New York in 2014, has partnered transport firms in countries such as Australia and Japan to offer its services. Last year, the firm was reported to have raised US$250 million (S$342 million) from investors, including German carmaker Daimler.

Ministry of Movement - which started operating here in 2016 under the brand name Swat - announced last year that it had raised US$2.2 million in funding from undisclosed investors.

GrabShuttle Plus, a similar on-demand service operated by ride-hailing giant Grab - which participated in the LTA tender - began operating in Punggol in November last year.

Expanding later to other areas such as Sengkang and the Cheng San-Seletar estate, GrabShuttle Plus allows commuters to book a ride on a minibus between any two bus stops in an area - at a fraction of the cost of Grab's private-hire car services. 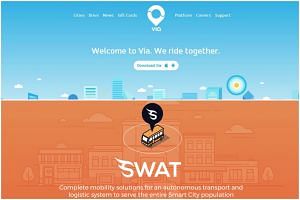 Globally, on-demand bus services have been implemented in countries such as the United States, with varying results.

Kutsuplus - which began operating in Helsinki in 2013 - is believed to be first to offer on-demand buses. But it shut down two years later despite having more than 20,000 registered users because the authorities deemed the €20 (S$32) public subsidy for each passenger on every ride prohibitive. Passengers had to pay only €5 a ride.