SINGAPORE - The Land Transport Authority (LTA) is looking to make car-lite modes of transport - like walking, cycling, and riding buses and trains - the preferred choices for commuters.

It is seeking public feedback on how this should be achieved, from developing more road corridors with dedicated bus lanes and cycling paths, to having more direct travel options such as on-demand, dynamically routed bus services.

According to an LTA survey, about seven out of 10 peak-hour journeys in 2016 were made using "walk, cycle and ride" modes, while the rest were in private vehicles.

Views and ideas will be taken into account as the LTA draws up a Land Transport Master Plan 2040.

To help steer the discussion, a 13-page public consultation document was launched on Wednesday (Sept 19) by Senior Minister of State for Transport Janil Puthucheary at the LTA's Hampshire Road headquarters.

Guest of honour at the event was Prime Minister Lee Hsien Loong, who also opened the SG Mobility Gallery, a 1,000 sq m showcase offering visitors a glimpse at the future of Singapore's land transport system.

The $3.7 million gallery has a 270-degree panoramic theatre and exhibits which use augmented reality, among various interactive and high-tech features.

Mr Lee walked from the LTA premises to nearby Tekka Centre, where a ceremony was held to mark the completion of the LTA's $300 million Walk2Ride initiative.

The 150m linkway connecting Little India MRT to Tekka market is the latest covered walkway to be finished under Walk2Ride, capping off a programme to build pathways stretching 200km. 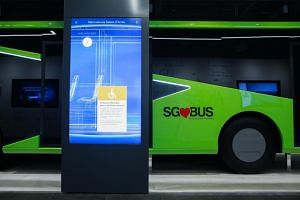 Walk2Ride was initiated under the previous Land Transport Master Plan released in 2013, which "promised more connections, better service and a transport system that supports a liveable and inclusive community".

The public consultation paper for the LTA's 2040 master plan has three broad themes.

The first is about how walking, cycling and riding can be made the preferred ways to travel, the second is about making these modes of commuting easier and more inclusive, and the third looks at how a land transport system can improve the quality of life.

The LTA has also appointed an advisory panel which is chaired by Dr Janil and comprises 14 other members. The panel will consider public views, deliberate on the various issues, and give its recommendations in early 2019.

People can share their views by taking part in electronic polls and using a response form in the public consultation document.

The LTA will also hold focus group discussions on the themes from next month to January 2019.