SINGAPORE - The Land Transport Authority (LTA) has launched a new enforcement team to crack down on speeding cyclists and users of personal mobility devices (PMDs).

Dressed in bright yellow polo T-shirts and bermudas, this Active Mobility Enforcement team will be deployed daily around the island to "deter reckless behaviour", said the LTA on Wednesday (May 11). 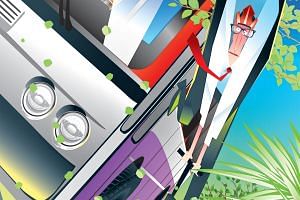 Whose road is it anyway? Cars vs Bicycles vs Pedestrians

The new enforcement team was announced during the Budget debate earlier this year.

At that time, Parliament was also told that the Government would be amending laws to give these enforcement officers powers to issue fines to reckless riders.

The ministry also said it would be moving to allow the use of bicycles and PMDs on the footpaths, as part of a move to encourage the use of these devices for short trips.

These legislative changes are still pending, so until then LTA's officers distribute brochures and advisories on safe riding.

On Wednesday, three officers were stationed along Woodlands Avenue 7 - the area has been identified as a stretch frequented by cyclists headed to nearby industrial areas.

"The presence of our dedicated enforcement team will provide the reassurance that we will not tolerate any reckless behaviour by cyclists or personal mobility device users," said LTA chief executive Chew Men Leong.