SINGAPORE - Commuters who frequent 20 of the busiest MRT stations such as Yishun and Ang Mo Kio will soon have location-specific information available to them.

This will help them make more informed choices and improve their commuting experience, the Land Transport Authority (LTA) said in a statement on Thursday (July 26).

This is part of a new Travel Smart Information programme that LTA is piloting. Posters put up in these stations will inform commuters of the most crowded travel times and train cars to avoid.

The posters will also inform commuters of bus routes they could consider taking as an alternative. These posters will be specific to each station.

Posters have already been put up in Hougang station, and will be rolled out to the other stations in the coming months.

This is the newest addition to LTA's Travel Smart programme. One previous effort was the launch of the Travel Smart Rewards (TSR) programme in May 2017. This scheme offered cash rewards and lucky draws to incentivise commuters to travel at off-peak times.

Another was the Travel Smart Network, which was launched in 2014. Employees from companies that are part of the network can get points under the TSR scheme which can be exchanged for cash rewards. 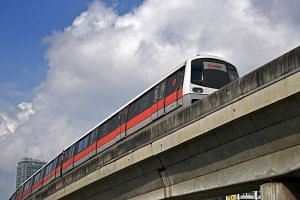 The network of companies now consists of 220 organisations and more than 360,000 employees. Companies can also tap the Travel Smart Grant to support initiatives that incentivise off-peak travel or alternative modes of transportation.

For example, Edmund Tie & Company used the grant to install a door-access system in 2017 that allowed them to give their employees more flexibility to arrive before 8am.

With the new scheme in place, 15.3 per cent of their employees now arrive before 8am as compared to 10 per cent previously.

Another was Robert Bosch (South-east Asia), which built bicycle stands and lockers to encourage cycling to work. Eleven per cent of the company's staff who previously took public transport switched to cycling.