SINGAPORE - The Land Transport Authority (LTA) has carried out more than 560 enforcement operations since May to tackle unsafe and reckless riding by cyclists and personal mobility device users.

In an update on Monday (Nov 7), LTA said that with the setting up of its dedicated active mobility enforcement team, more than 860 advisories were issued to cyclists, as well as power-assisted bicycle and personal mobility device users caught riding unsafely on footpaths and cycling paths.

The authority noted that under the law, personal mobility devices are not allowed to be used on roads.

A total of 20 electric scooters have been seized by LTA from users caught riding on the road. 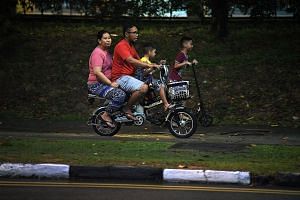 Enforcement action against cyclists who use non-compliant power-assisted bicycles, also called electric bicycles, has also been taken by LTA, with more than 1,400 notices issued to such cyclists between January and September.

LTA said most of these users were observed to be "travelling dangerously at high speeds with devices that can go as fast as 70kmh, endangering themselves as well as other road users".

Under the Road Traffic Act, a person found using non-compliant vehicles may be charged in court and fined up to $2,000, or jailed up to three months for the first offence.

For subsequent offences, the offender may be fined up to $5,000 or jailed up to six months, if found guilty. The non-compliant vehicle can also be seized for investigations.

LTA said it has also carried out joint operations with the Traffic Police on e-bicycle users who ride recklessly on roads. Common offences include riding against the flow of traffic or riding without a helmet.

Besides taking action against errant users, the authority's enforcement officers have also been educating cyclists and personal mobility device users on the rules and code of conduct recommended by the Active Mobility Advisory Panel and accepted by the Government earlier this year. This includes giving out educational materials to these users on the rules, as well as safe riding tips.

Helping the officers in education efforts are Active Mobility Patrol teams from 20 communities, comprising 300 volunteers who give advice to active mobility users, such as how cyclists and personal mobility device users must stay below the speed limits of 15kmh when riding on footpaths, and 25kmh on cycling paths.

"LTA will not hesitate to take enforcement action against any rider found to be riding recklessly or in a manner that cause harm to pedestrians and other road users," the authority added in a statement.