SINGAPORE - The Land Transport Authority (LTA) has apologised for the incorrect Tamil translation of the name of one of the Downtown Line 2's MRT stations.

Facebook user Mani Pariasamy had posted a photo of Tan Kah Kee station, pointing out that the Tamil translation of the name was inaccurate - it read as "paan kah kee" instead.

The error was also pointed out by Twitter user Jinhua Kuek.

LTA later issued an apology on Saturday evening (Dec 5) for the error: "We apologise for the error in the Tamil translation of Tan Kah Kee station and would be taking immediate action to have the station name replaced. This would be done before the stations open for passenger service on Dec 27, 2015."

The station is one of 12 on the 16.6km line, which opened to the public for the first time on Saturday, ahead of its official opening on Dec 27. 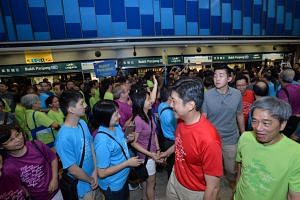 Downtown Line 2 opens to the public for the first time

Commuters can travel the entire Downtown Line for free from Dec 27 to Jan 1. They need only start and end their journey at any of the 18 DTL stations to enjoy free travel.