SINGAPORE - An advisory panel has recommended slower speeds for users of personal mobility devices (PMD) in the wake of a rise in the number of accidents on public paths.

In particular, the Active Mobility Advisory Panel is calling for:

It will also help reduce the severity of injuries, said Dr Faishal, who is also the Senior Parliamentary Secretary for Education and Social and Family Development.

The increasing use of PMDs, such as e-scooters, as well as bicycles and power-assisted bicycles in recent years has led to a significant rise in the number of reported accidents on footpaths. In 2015, there were 19 reported cases. This rose to 42 in 2016 and 128 last year.

On road crossings, the panel said it consulted active mobility device users and motorists, and it was agreed that “predictability of behaviour” was very important.

Motorists said it was not easy to tell if a person was a pedestrian or a PMD user, and so it was difficult to gauge whether they had sufficient time to drive across the crossing. PMD users who travel fast could also appear in their line of sight suddenly, leaving them with little time to react.

On the other hand, PMD users said it was not clear whether motorists would stop to allow them to cross.

The panel is thus recommending that it be mandatory for all active mobility device users to stop and look out at road crossings before riding across “at a slow speed”. The panel also strongly encourages motorists to slow down at crossings and stop for all path users who are crossing, including cyclists, PMD users and pedestrians.

As for helmets, the panel wants wearing them to be mandatory for those using devices when travelling on the roads. “In practice, this will only apply to cyclists on roads, as PMDs are not allowed on the roads under the Road Traffic Act,” the panel said.

It noted that cyclists on roads travel alongside larger and faster vehicles and are the most vulnerable users. “In the event of an accident, wearing a protective helmet would reduce the impact and injuries suffered by the rider.”

In its report, the panel added that while it strongly encouraged riders to take up personal and third party liability insurance, it did not recommend making such insurance mandatory at this point. Instead, the panel felt greater focus should be placed on the prevention of accidents, after it consulted industry players and considered the impact of mandatory insurance on path users, including PMD users.

The panel also noted that some employers already voluntarily provide insurance to their employees who are PMD users. It also intends to work with the Government to encourage large employers of PMD users, such as food delivery companies, to provide adequate insurance. 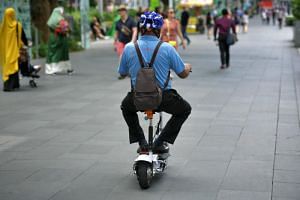 Law to curb reckless use of mobility devices kicks in

The Ministry of Transport said on Friday (Aug 24) that it would study the panel’s recommendations and issue its response in due course.

Dr Faishal said the panel has to balance the views of various groups.

On the one hand, many members of the public have expressed strong concerns about safety and want more regulations on active mobility device users. On the other hand, certain active mobility groups, including food delivery riders, want the rules to be relaxed.

The panel has to balance these views and consider what is in the larger and long-term interest of Singapore and its residents, he said.

“The use of active mobility is and has become a key part of the transport landscape, benefiting many people from different walks of life... as a convenient and cheap form of transport, especially for first- and last-mile journeys and short commutes,” he said. “At the same time, safety remains paramount and must take precedence over pure convenience.”

In 2016, it recommended a set of rules and code of conduct for cycling and the use of PMDs on public paths such as footpaths and cycling/shared paths, which were accepted by the Government and incorporated into the Active Mobility Act (AMA) which took effect on May 1, 2018.

Its latest recommendations are from its second review to improve safety on public paths and a result of a survey of more than 6,000 people. It also took in feedback from about 100 participants, who cycled and rode different devices on public paths, on how to improve the current rules based on their experiences. Based on the survey, 77 per cent of respondents supported lowering the existing speed limit from 15kmh on footpaths, with 35 per cent feeling it should be 8kmh and 19 per cent thinking it should be 10kmh.

Most of those surveyed felt helmets should be mandatory for cyclists riding on roads, with 77 per cent in support of it.