SINGAPORE - An MRT train on the East-West Line was struck by lightning and stalled near Bedok station a little past 4pm on Monday (Nov 20). As a result, journey times between Tanah Merah and Paya Lebar were delayed for at least 10 minutes.

The westbound train heading towards the city stalled as it was approaching Bedok MRT station, Mr Patrick Nathan, SMRT's vice-president of corporate communications, told The Straits Times in a statement.

Passengers were detrained at Bedok station, and the train was withdrawn from service for investigation. After the incident, the train captain, who said he was unwell, received medical attention.

The captain was taken to Changi General Hospital around 4.20pm by a Singapore Civil Defence Force ambulance in a conscious and alert state.

SMRT said in an update later on Monday night that the train captain would be warded on Monday night at CGH for further observation. The operator is in touch with the captain, his family and his doctors.

Trains on surface lines are occasionally struck by lightning, but operator SMRT has said that occupants are protected and are unlikely to be injured in such an event.

Mr Nathan said that each train is protected by a “Faraday Cage”, an enclosure formed by conductive material that blocks electric fields and electric currents such as lightning strikes. The National Environment Agency had forecast thundery showers over northern, eastern and central Singapore in the late afternoon earlier in the day, at 2pm.

A spokesman for the Meteorological Service Singapore (MSS) told The Straits Times that lightning activity was detected in Singapore between 2pm and 6pm on Monday, mainly over the northern, central and eastern parts of the island.

"Around 3.37pm this afternoon, a cloud-to-ground lightning stroke was detected close to the Tanah Merah MRT station," said the spokesman.

A lightning stroke refers to a discharge of lightning between a cloud and the earth, especially one that causes damage.

On May 11, 2016, an SMRT train on the North-South Line was crippled by lightning just before 4pm, disrupting southbound services from Yishun to Yio Chu Kang stations. 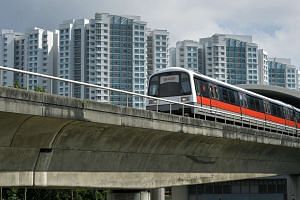 Are commuters in an MRT train protected from lightning strikes?

An hour before the lightning incident on Monday, an alarm went off at Clementi station on the East-West Line.

When The Straits Times arrived at the station, about a dozen policemen and SMRT employees were seen checking an electrical box near the Emergency Stop Plunger switch.

The police later said it was a false alarm.