SINGAPORE - The Jurong Region Line (JRL), which will serve residents in Choa Chu Kang, Boon Lay and future developments in the Tengah area, will have 24 stations and open in three phases starting from 2026.

The 24km-line, which will be above ground entirely, will also link up to the North-South Line at Choa Chu Kang and the East-West Line at Boon Lay.

Details of the island's seventh MRT line were announced on Wednesday (May 9) by Transport Minister Khaw Boon Wan, who said the JRL will improve the resilience of the entire MRT network.

The JRL, Mr Khaw said, will go towards achieving the Government's vision for Jurong. It will help develop the Jurong Lake District into the largest commercial hub outside the Central Business District and support the development of the Jurong Innovation District. 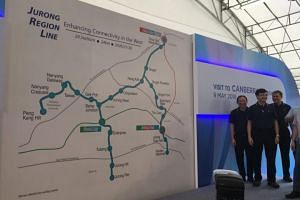 Said Mr Khaw: "When all these plans come together, Jurong will be a water front business hub nestled in greenery, served by good public transport connections, as well as amenities to support active mobility."

He added that the JRL "marks a quantum leap" in the development of the Jurong region, which was until the 1950s, mostly swamps, jungles and fishing villages. The region has, however, been built up into an economic and residential centre, with 300,000 residents and 400,000 workers.

The new MRT line will connect to places such as Nanyang Technological University, Jurong Industrial estate, including Jurong Island and the future Jurong Gateway.

Mr Khaw gave the update on the JRL during a visit on Wednesday to the site of the future Canberra station, which he announced will be open for service by December 2019.

Canberra is located between Sembawang and Yishun stations on the North-South Line. It will serve commuters living in nearby estates such as Sembawang Springs, as well as a mix of upcoming public and private residential developments in the neighbourhood.

Around 17,000 households stand to benefit as they will be within a 10-minute walk from the station.