SINGAPORE - An industry briefing on the progress of the Kuala Lumpur-Singapore High Speed Rail (HSR) Project was held on Wednesday (July 5) in Singapore.

The briefing was attended by almost 400 participants from 165 organisations, including rolling stock and system suppliers, engineering and legal consultants, as well as operators and construction companies.

The briefing was organised by the Land Transport Authority (LTA) and MyHSR - a unit under the Malaysian Ministry of Finance tasked with undertaking the rail project. It also aimed to encourage companies to form consortia to participate in the tender for the assets company (AssetsCo), which will be responsible for designing, building, financing and maintaining all rolling stock and rail assets for the rail project.

The tender is expected to be called by the fourth quarter of this year (2017).

"Following the briefing, further meetings have also been scheduled with the participants to facilitate discussions and obtain feedback on the briefing topics," said LTA and MyHSR in a joint statement on Wednesday (July 5), adding that the feedback received will be taken into account for the procurement plan and tender specifications.

"Following the industry briefing, we will be calling the AssetsCo tender by the end of this year, and we look forward to receiving quality bids from various consortia," said LTA chief executive Mr Ngien Hoon Ping. 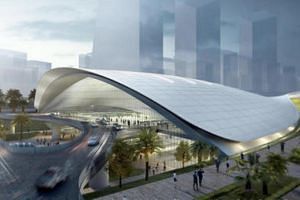 MyHSR chief executive officer Mr Mohd Nur Ismal Mohamed Kamal said: "Other tenders such as the Civil and Operating Company ('OpCo') tenders will be developed according to the project timeline and announcements will be made in due course."

The 350km Kuala Lumpur-Singapore HSR is slated to be completed by end-2026 and is expected to cut travel time between the two cities to 90 minutes.