SMRT Corp and the Land Transport Authority have been on a billion-dollar, multi-year programme to replace major operating and infrastructural assets on the North-South and East-West lines since 2011.

But the suspected flaws that brought Singapore's oldest and most heavily used lines to their knees on Tuesday had nothing to do with the major assets being replaced.

They were fairly commonplace weaknesses - worn cable insulation, tunnel water leakage, and a glitch in a power substation switch. The first two have actually figured prominently in several past incidents, including two tunnel fires. So, they were not exactly unknown weaknesses.

One would think that after the long, costly and humiliating public inquiry in 2012 that found SMRT culpable for the two consecutive breakdowns in December 2011, which concluded that the incidents could have been prevented if a more vigorous maintenance regimen had been in place, SMRT would be paying more attention to the health of the network.

Especially when the inquiry had prescribed steps that were necessary to prevent a recurrence of such a system failure.

Because such service disruptions are still fairly frequent (the previous one crippled the North-South Line for two hours during the morning peak on July 3), apologies from the operator, regulator or Government are beginning to sound glib and hollow.

So, you would forgive commuters for being a tad unforgiving when they came face to face with a breakdown that was even larger in magnitude than the ones in 2011.

Singapore's MRT system carries an average of 2.8 million trips per day, and the North-South and East-West lines account for the lion's share of those trips.

The latest incident inconvenienced hundreds of thousands of commuters, not to mention the scores of transport workers and engineering staff who had to be called back to deal with the fallout.

And because such service disruptions are still fairly frequent (the previous one crippled the North-South Line for two hours during the morning peak on July 3), apologies from the operator, regulator or Government are beginning to sound glib and hollow.

To be fair to the new management at SMRT, the spate of breakdowns is not entirely its doing.

Chief executive Desmond Kuek and his team have been grappling with the mammoth task of putting things right - a task involving complex projects such as re-sleepering, re-signalling, train rejuvenation, and finally, replacing the power-supplying third rail.

All this is done during the short engineering hours after the last train pulls in for the night and before the first one rolls out the next morning.

And as Mr Kuek points out, it is "a dynamic process... when you have new systems coming into play with legacy systems". 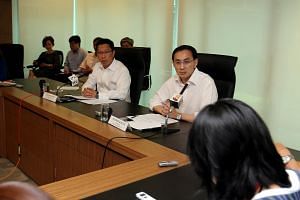 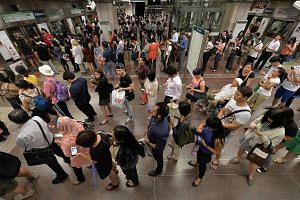 He also points out that more condition monitoring systems need to be installed if it were to have a targeted approach to maintenance. That is something SMRT has realised since the public inquiry. So, why are these systems not widely in place yet?

Perhaps it has to do with priorities. The major asset renewal programme SMRT and LTA have embarked on is, of course, vital. But Tuesday's breakdown tells us that small, mundane bits of the system can also be its Achilles' heel.

In hindsight, SMRT should have paid more attention to these components. But in reality, it is limited by bandwidth and resources. And as such, its maintenance regimen is still largely determined by what engineers call "mean time between failures".

On this front, perhaps the Government should step in to help beef up resources required for SMRT to make things right quickly.

It is an unconventional proposal, especially to an administration that is usually mindful of how it spends public funds.

But maybe the Government can see this as an engineering equivalent to the Bus Service Enhancement Programme. After all, getting the two MRT lines back in shape will benefit more commuters than the additional buses that BSEP is funding.

And SMRT can treat the aid like a loan, to be offset by various components in an ongoing negotiation it has with the Government on its migration to the new rail financing framework.

If not, something else needs to be worked out. We should not dilly- dally, for the next major breakdown could well be around the corner.

A version of this article appeared in the print edition of The Straits Times on July 09, 2015, with the headline 'If SMRT lacks resources, Govt should step in'. Subscribe
Topics:
More
Whatsapp Linkedin FB Messenger Telegram Reddit WeChat Pinterest Print Purchase Article Copy permalink