Improving electrical system will cost more money and take time but is the way to go, say observers

Recommendations to bolster the electrical system of Singapore's rail system are a step in the right direction, industry watchers say.

But they will also result in higher investments.

Associate Professor Gooi Hoay Beng from the Nanyang Technological University's School of Electrical and Electronic Engineering said more money will have to be spent on hardware component maintenance and replacement.

Investment will also have to be made in boosting the IT infrastructure "with lots of real-time sensing for monitoring and control".

The professor was responding to recommendations made by a 13-man panel assembled last December by the Land Transport Authority (LTA) to look into ways to improve the electrical resilience of the rail system here.

Government Parliamentary Committee for Transport chairman Sitoh Yih Pin said: "I note that the panel has recommended that in the long term, the design of the rail system should provide for a maximum downtime of five minutes during a fault. 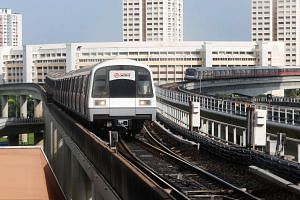 Prof Gooi noted that an intelligent fault identification software system (iFIS) - which can help pinpoint faults - is a sophisticated system that also requires heftier investment. He added: "It would take some time to acquire the necessary skills and targets but we will get there one day."

I note that the panel has recommended that in the long term, the design of the rail system should provide for a maximum downtime of five minutes during a fault.

If this can be achieved, it will mean that all commuters can look forward to improved reliability and fewer delays.

This is good news for all.

"If this can be achieved, it will mean that all commuters can look forward to improved reliability and fewer delays.

"This is good news for all."

According to the LTA, rail disruptions caused by power and trackside faults more than doubled between 2011 and 2014.

The unprecedented network- wide breakdown on July 7 last year was also caused by an electrical fault, which crippled the entire North-South and East-West lines during the evening peak period that day.

And electrical faults have caused a number of fires on the MRT and LRT network, with at least two occurring in tunnels.

National University of Singapore transport researcher Lee Der Horng said that many of the recommendations made by the panel "are what should have been in place".

"Nevertheless, it is good to let the people know that power-related issues are being taken care of."