Defects not safety-critical and trains being sent back for repair; all work set to finish by 2019

More than two dozen of Singapore's first China-made MRT trains are being shipped back to their manufacturer after defects were found.

The Transport Ministry confirmed this last night, but said that the problems were not serious. It added that repairs on the trains, which are still under warranty, should be finished by 2019.

This is four years earlier than stated by operator SMRT, and follows negotiations between the Land Transport Authority (LTA) and the manufacturer.

The 26 trains, which are barely five years old, were made by China Southern Railway (CSR) Qingdao Sifang Locomotive and Rolling Stock Company. Together with Japan's Kawasaki Heavy Industries, it won the first contract here to supply 22 six-car trains for the North-South and East-West lines in 2009 for $368 million.

SMRT Trains managing director Lee Ling Wee said: "Our engineers discovered that 26 of the 35 trains delivered by the manufacturer had cracks in the structure connecting the car body and the bogie after they were delivered in 2013. 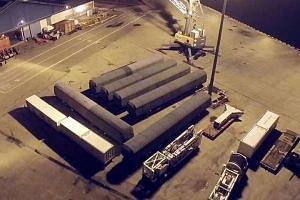 The bogie is part of the undercarriage where the wheels are attached.

A Transport Ministry spokesman later said the trains are being sent back in batches and that repairs should be finished four years sooner, after the company said it would be able to speed up the process.

"The defects are hairline cracks and are not safety-critical. They do not affect the train's systems, performance or passengers' safety," she said. All defects are monitored closely and monthly assessments are also conducted before trains are put into service, she added.

The ministry spokesman said that the LTA hired an external third party to assess the trains in 2013. It confirmed that the trains were safe to operate and, on its recommendation, there has been close monitoring of the "crack propagation rate".

The Straits Times understands the episode could affect Singapore's plans to raise its rail service standards. The recall of the trains will, for instance, translate into an immediate shortfall in capacity. SMRT currently has 141 trains for the North-South and East-West lines.

According to online news portal FactWire, some of the trains had windows shattering repeatedly. In 2011, one train's Chinese-made uninterruptible power supply batteries exploded during repair.

While there have been no reported cases of injury, CSR Sifang is said to have replaced all the batteries with German-made batteries. These batteries supply power for lights and ventilation during a breakdown.

FactWire said cracks were also found in structural components of the trains, including the sub-floor - a compartment under the passenger floor holding the equipment box and electrical wires - and parts connecting the car body to the bogie.

Quoting a source from CSR Sifang, FactWire said Kawasaki Heavy Industries was taking over the manufacturing of the flawed aluminium train car body, while the Chinese company will disassemble each recalled train and refit its parts onto the new body.

FactWire said its reporters witnessed two train cars wrapped in green covering being moved out of Bishan Depot after 1am on June 12.

The Transport Ministry spokesman explained that trains, given their size, are transported at night to minimise inconveniencing road users. "The green covers are to protect the trains, just as how we would bubble-wrap or enclose in boxes and styrofoam-pad electronic equipment, machinery etc, which we want to transport overseas," she added. As the trains are under warranty, sending them back to be repaired is "the appropriate thing to do to ensure we get the value for our money".

Kawasaki Heavy Industries (Singapore), which is coordinating the supply of trains from CSR Sifang, was not available for comment.

Even as it is recalling faulty trains, the consortium is still delivering new trains to Singapore. In 2014, it clinched a $749 million contract to supply 91 four-car trains for the upcoming Thomson-East Coast Line.

Last year, it landed another deal worth $136.8 million to supply 12 six-car trains for the North-South, East-West lines: the final batch of 57 new trains that will be put into service from 2016 to 2019.

Hong Kong's MTR Corp, which has also placed massive orders with CSR Sifang, told The Straits Times that it has not taken delivery of any new trains from the Chinese manufacturer yet.

A version of this article appeared in the print edition of The Straits Times on July 06, 2016, with the headline 'Hairline cracks in 26 MRT trains made in China'. Subscribe
Topics:
More
Whatsapp Linkedin FB Messenger Telegram Reddit WeChat Pinterest Print Purchase Article Copy permalink