SINGAPORE - Starting next Tuesday (Oct 2), users of Grab's on-demand shuttle service will be able to hop on and off in Serangoon, Hougang and the Airport Logistics Parks.

Grab Singapore announced on Friday (Sept 28) that it will be expanding its GrabShuttle Plus trials to better link the north-eastern and eastern parts of Singapore.

A Grab spokesman said that the new areas were selected as the company had received “plenty of requests” from commuters living there for the GrabShuttle Plus service to be made available.

Areas that are already served by the service include Punggol, Sengkang, Bedok, Tampines and Pasir Ris.

This is on top of operations in the Cheng San-Seletar neighbourhood, and routes to and from Kranji Camp II and Sungei Gedong Camp.

GrabShuttle Plus operates on a non-fixed route, with buses allocated to users based on factors such as proximity of buses to the user's pick-up and drop-off points.

This is in contrast to GrabShuttle, which operates based on fixed routes and timings.

Users of GrabShuttle Plus will be able to travel anywhere within the east, north-east and south-east areas.

In its statement, Grab said that its ridership has grown more than eight times since the launch of GrabShuttle Plus trials last November. 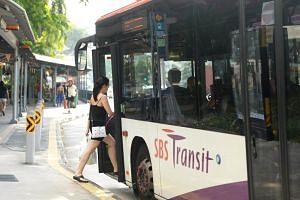 Almost 70 per cent of current GrabShuttle Plus bookings are for routes longer than 4km, according to data collected during the trials.

This suggests that there is a demand for longer on-demand bus journeys, the statement said.

"The service expansion will help to meet this demand, and help to improve travelling time for users by at least 30 per cent, as compared to other modes of public transportation within the service areas," the statement added.

The expanded trial will include several new routes, including direct transport to and from Changi Business Park, Airport Logistics Parks and industrial areas.

Another new feature will enable users to key in their pick-up and drop-off points in the GrabShuttle Plus app and make a booking immediately, or up to three days in advance.

Fares will also be calculated based on distance, starting from $2.80. They will be capped at $9.

Each user can also bring up to five additional passengers at an additional cost of $1 each. The prices are fixed and not subject to dynamic pricing.

In addition, GrabShuttle Plus users can also expect six-seater vehicles when they make a booking.

The Grab spokesman explained that Grab aims to minimise the number of vehicles it uses on the road.

“By adding existing six-seater vehicles in our fleet, we help drivers maximise their time on the road, while serving more commuters efficiently,” the spokesman said.

The drivers will need to obtain the relevant licence and go through an additional training session to join GrabShuttle Plus.

Grab also dismissed concerns that the expansion of GrabShuttle Plus might cannibalise its other services, such as GrabCar or JustGrab.

The spokesman said: “By providing different transport options at different price points, we believe that we can serve more consumers with varying needs and budget.”

Grab also does not see itself competing with the Land Transport Authority’s on-demand bus service, which will launch a trial run soon.

Grab Singapore head of transport Andrew Chan said that Grab has received plenty of positive feedback from users since the launch of the trials.

He said: "Many have also requested for us to expand this service to more neighbourhoods, while increasing accessibility for commuters in the north-eastern and eastern areas.

"We are confident that this expansion will address these needs and better utilise existing vehicles, while contributing to Singapore's car-lite vision."