SINGAPORE - All ComfortDelGro cabbies will be removed from ride-hailing app Grab's JustGrab platform, just a month after they had been given the option to opt into the service.

Grab opened the service - which offers flat fares to commuters for a ride in either a taxi or private-hire car - to ComfortDelGro cabbies in February, despite not having a partnership with the taxi operator. It, however, partnered with the five other taxi operators here a year ago to offer JustGrab.

A Grab spokesman confirmed that ComfortDelGro cabbies will continue to be able to take bookings through the GrabTaxi service, which dispatches metered taxis to commuters.

ComfortDelGro, the largest taxi operator here with more than 13,000 taxis, had in January launched UberFlash in partnership with Grab's competitor, Uber. Like JustGrab, the service dispatches the nearest ComfortDelGro taxi or Uber private-hire car to riders.

The Land Transport Authority (LTA) had also said on Monday (March 19) to other media outlets that it was concerned about the move as taxis should offer metered fares unless their companies had "endorsed Grab to offer flat fares on their behalf". It issued Grab a warning as a result.

"Taxi drivers are reminded that they can only accept flat fares set by registered third-party taxi booking service providers such as Uber and Grab if these are endorsed by taxi companies," said an LTA spokesman.

As such rides are not endorsed, these cabbies are deemed by LTA to have "overcharged" commuters. 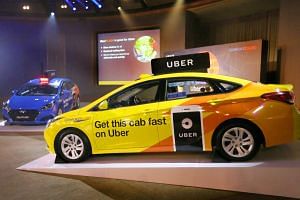 GrabTaxi head Melvin Vu told The Straits Times the offer to opt into JustGrab had been extended to ComfortDelGro cabbies as a means for them to earn additional income.

"We strongly believe that taxi drivers, as self-employed individuals, should be given the choice and flexibility to join all platforms, and not be limited by corporate arrangements," he said.

"We will continue to actively engage the LTA to encourage innovative thinking and taxi companies to work with us on improving driver livelihoods and passenger experience."

This would allow for a more open and competitive market, he said.

Cabbies are not employed by the taxi operators and only rent their vehicles from the firms so placing too many restrictions on their choices would make it seem like an employee-employer relationship, he added.

"If operators restrict drivers to only one booking app, it essentially limits their customer choice," said the MP for Ang Mo Kio GRC.