Grab is to receive an investment of US$1 billion (S$1.34 billion) from Japanese company Toyota, in its latest round of financing after it acquired Uber's South-east Asian operations in March.

The investment - touted as the largest by an automotive manufacturer in the global ride-hailing sector - will see both parties expand their collaboration in "connected cars", Grab said yesterday.

By using data collected by Toyota from Grab's cars on the roads, the two companies will explore such services as user-based insurance and financing programmes.

As part of the agreement, a Toyota executive will sit on Grab's board and another Toyota staff member will be seconded to Grab as an executive officer.

Grab president Ming Maa said: "As a global leader in the automotive industry, Toyota's investment in Grab is based on its conviction in our leadership in driving the adoption of new mobility solutions and expanding O2O (online-to-offline) mobile services, such as GrabFood and GrabPay, in the region."

Delivery service GrabFood, rolled out in Singapore last month, is one of Grab's newest products. It is also available in regional markets, including Malaysia, the Philippines and Thailand.

Toyota is not the first carmaker to invest in Grab. In January, Hyundai said it had injected an undisclosed amount, and the two parties plan to develop a mobility service platform using Hyundai's eco-friendly models such as the Ioniq Electric car. 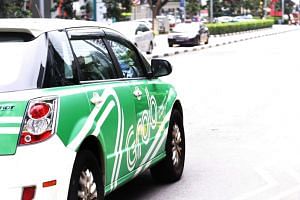 The latest Toyota investment builds on its tie-up with Grab that started in August last year.

In a pilot scheme, Toyota installed its driving recorders in 100 Grab rental cars to collect data on vehicle and driving behaviour that is stored on Toyota's mobility services platform.

Mr Li Jianggan, founder of tech investment firm Momentum Works, said that motor financing can help automakers sell more cars and offers a steady revenue stream. "Grab will have the data of drivers as well as their driving patterns, and whether they are risky or not," Mr Li added.

He also said that Toyota's large investment in Grab means it is less likely to back other ride-hailing rivals, placing Grab in a more favourable position.

Associate Professor Lawrence Loh of the National University of Singapore Business School, said: "A lot of investors are now willing to put their money on the winning formula, which Grab has: A full spectrum of products and services centred on serving customers."

A version of this article appeared in the print edition of The Straits Times on June 14, 2018, with the headline 'Grab to get $1.34b from lead investor Toyota'. Subscribe
Topics:
More
Whatsapp Linkedin FB Messenger Telegram Reddit WeChat Pinterest Print Purchase Article Copy permalink