The Rail Manpower Development Package (RMDP), announced by Transport Minister Khaw Boon Wan at a transport workers' appreciation event on Saturday (Nov 9), will become the main source of training funds for MRT and LRT workers in the next five years.

"Operators are financially not the most healthy at the moment... In order not to hold back such investments, the Government, through the Land Transport Authority (LTA), will co-invest," said Mr Khaw in his speech at the event.

"That way, the worker will have the tools to do what is necessary to raise their productivity and do their job better... The bottom line is we want to improve service levels for the commuters."

In the 12 months to end-March this year, SMRT Trains' losses hit $155 million - almost double from a year ago - with spending on repairs and maintenance accounting for about 71 per cent of rail-fare revenue.

SBS Transit's Downtown Line has also registered losses of $125 million over the past three years, with its train division as a whole losing tens of millions of dollars.

The LTA said the package was co-developed with rail operators and the National Transport Workers' Union (NTWU) as a coordinated effort to ensure training programmes stay relevant to rail workers' needs.

Among other things, it will allow for investments in hardware equipment like simulators and virtual reality tools.

Some workers currently only get the opportunity to practice what they have learnt during limited engineering hours - often after midnight when the trains have stopped operations. LTA said simulations will enable them to do so in the day, accelerating their pace of learning.

There will also be scholarships, to attract future leaders of the industry.

The SGRail Industry Scholarships, as well as sponsorships for current workers, will benefit around 400 students and staff, the authority said.

NTWU executive secretary Melvin Yong welcomed the move in a Facebook post on Saturday, saying that the new plan was partially the result of the union's insistence that more resources be invested in manpower training.

Mr Yong, who is also an MP for Tanjong Pagar GRC, said the union will ensure that there is money for experienced workers to get certified for skillsets they already informally have, and for younger rail workers to build their careers. 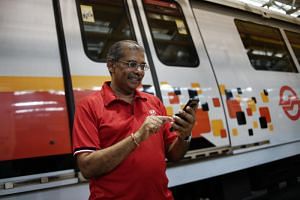 SMRT's rail and bus workers to get digital skills training

Construction for first 5 stations on Jurong Region Line slated to start in 2020, end in 2026

"We hope that these coordinated efforts will ensure that our rail workforce remains one of the most professional in the industry regionally and beyond," he added.

The focus on the rail industry comes amid the planned expansion of the rail network from 230km to 360km over the next decade, even as stakeholders focus on upgrading ageing assets to make sure current lines continue to be reliable and efficient.

Three rail lines - the Thomson-East Coast Line, Jurong Region Line and the Cross Island Line - are already in the works.

On Saturday, both rail operators SBS Transit and SMRT applauded the Government's move.

He noted that 1,500 SBS Transit workers across 16 job roles will receive new training as a result of the package. "This will equip our people to be future-ready to deal with new technological challenges ahead," he said.

"The rail industry is an exciting place to be...it is important for our rail staff to continuously upgrade their skills and knowledge to be an important part of this growing industry," said Mr Lee.

Transport workers at the event stressed the importance of training to improve their skills and enhance their careers.

"Training worked for me because I got promoted after completing the programme. The package is definitely an avenue for me to grow in the company," he said.

Mr Sean Han, a technician with SBS Transit who took an electrical engineering course this year, said simulations would have made his training less physically demanding.

"We had to go into tunnels between midnight and 4am during engineering hours," the 28-year-old said.

In his speech, Mr Khaw said the Transport Workers' Appreciation Day had been inaugurated in 2017 when "there was a lot of unhappiness about public transport" and "morale was a bit low".

"Public transport workers have made a lot of sacrifice. When most people are sleeping, they are working. This event reminds everybody to be gracious and grateful," he added.