Bus service 82 departed Punggol temporary bus interchange at 5.15am, marking the debut for the British-based company in Singapore.

Over 10 bus spotters - enthusiasts whose hobby is to identify every bus make and model - also turned up before the crack of dawn to board the first service.

One of the commuters - Mdm Asmah Haron, 55, a kitchen helper - said Go-Ahead's first service ran smoothly. "The bus left the interchange earlier at 5.15am, instead of 5.30am, which means I can get to work earlier today," she said. 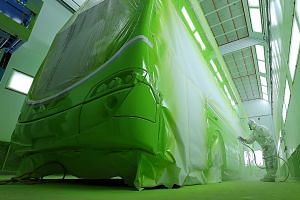 All ready to Go-Ahead in Punggol

Go-Ahead is the second foreign operator to enter the market, under a Government contracting model aimed at restructuring the sector to deliver better services for commuters.

Last November, it won the rights to operate 25 bus services to operate routes in Pasir Ris and Punggol - called the Loyang package - with a bid of $497.7 million.

In May this year, the Anglo-Australian Tower Transit started operations in the western part of Singapore, effectively breaking a three decade duopoly held by SBS Transit and SMRT in the industry.