SINGAPORE - About 30 food delivery riders met Home Affairs and Law Minister K. Shanmugam on Tuesday evening (Nov 5) to voice their concerns that the ban of e-scooters from footpaths would affect their livelihoods.

They had gathered at Mr Shanmugam's Meet-the-People Session in Yishun over the ban, which came into effect on Tuesday.

In a Facebook post on Wednesday, Mr Shanmugam said it was a "good, civil meeting", and that he would call for another one.

He said: "I explained the reasons for the move on personal mobility devices (PMDs). They explained their position, their difficulties.

"I said we understood their position, but I would also convey their views to the Ministry of Transport, and to Cabinet."

The minister was among several MPs that e-scooter users have approached for help.

Tampines GRC MP Desmond Choo said: “They asked if food delivery riders could be given special licences if they passed tests and were insured. That could be viable and should be studied further.”

The footpath ban has caused widespread concern among e-scooter users here since it was announced in Parliament on Monday. Many pedestrians, on the other hand, welcomed the move.

We are just trying to earn a living, say food delivery riders | The Straits Times

An informal Facebook poll by government feedback unit Reach on Tuesday, which was open for 24 hours, found that 51 per cent of 9,100 respondents were against the ban, with the remaining supporting it.

There are about 100,000 registered e-scooters in Singapore, and about 7,000 people working for the three major food delivery companies - Deliveroo, GrabFood and Foodpanda - use e-scooters to carry out deliveries.

Many riders said they are worried that the ban will affect their ability to carry out their jobs. 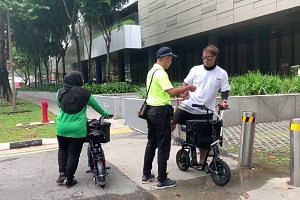 Over 100 PMD users warned on first day of footpath ban; riding on path's grass patch can be an offence

E-scooters to be banned from Singapore footpaths from Nov 5

The Land Transport Authority said its officers have issued more than 360 warnings to PMD riders caught riding on footpaths as of 5pm on Wednesday.

A food delivery rider, who wanted to be known only as Mr Z, told The Straits Times that he was among an initial group of five riders who planned to meet Mr Shanmugam. More riders went along after finding out about the meeting.

Said Mr Z, 37: "We wanted to find him because it really affected our rice bowl. There are not enough cycling paths in Singapore.

"We asked him to let us ride on footpaths, because without them it is quite difficult for us... a lot of people are suffering."

He said he is hopeful that there will be some help for them after the meeting.

Images of the meeting between the riders and Mr Shanmugam were circulated on social media on Tuesday night.

Mr Shanmugam also said in his Facebook post that the person who posted the photos was a man who had previously posted an online petition calling for a ban on PMDs.

"He didn't seem to be part of the PMD group, but seems to have intended to convey an impression of the meeting which is quite inaccurate - that in some way I was ambushed by the PMD riders, and they surrounded me."

Such conduct was "sneaky and unnecessary", he said, adding the man "is a supporter of a political party".

On Wednesday evening, about 50 food delivery riders who use e-scooters also gathered at a Meet-the-People session in Ang Mo Kio to voice their concerns.

There, a few representatives said they met a grassroots leader.

GrabFood rider Lee Bee Leng, 46, said they were advised to submit a joint letter on their concerns and suggestions.

Speaking in Mandarin, she said: “We are not here to protest. We just want to give our side of the story.

"Now when some people see us, they look at us as if we are ghosts, but we are the ones who are delivering food for them rain or shine."

Nee Soon GRC MP Lee Bee Wah said she is talking to both food delivery riders and parents who use e-scooters to take their children to school about how they can switch to other modes of transport or use the cycling path network in Yishun.

For food delivery riders, she will also look into measures such as helping them to buy bicycles where necessary.

Mr Louis Ng, another MP from Nee Soon GRC, who has been approached for help by about 10 residents, said: “We are looking into providing some interim financial assistance to food delivery riders from low-income families who depend on this for their livelihood.

“It hasn’t been easy for them as they lost their livelihood overnight and will have to adapt now.”