Malaysian carrier to restart daily flights from Subang, after halting services to S'pore in Dec

Malaysian airline Firefly made its inaugural landing at Seletar Airport yesterday morning, nearly five months after its services to Singapore were suspended.

Firefly will operate two flights daily between the Subang and Seletar airports from this week, and the frequency will increase to six flights daily from next Monday.

He gave this timeframe at a joint press conference with Transport Minister Khaw Boon Wan at Seletar Airport, after a ceremony to mark the arrival of Firefly Flight FY3126, which landed at 10.50am.

"The GPS approach is something we have agreed... We are looking for Firefly to work towards that in a timely manner. We are looking at the next maybe six to 12 months," Mr Loke said.

Mr Khaw said regulators from both countries will be meeting next week to discuss the GPS-based procedures, and he is "quite confident it can be done pretty soon".

The GPS procedures will replace the Instrument Landing System (ILS) procedures at Seletar, which had triggered a bilateral dispute over airspace issues.

For us, the key point is safety. Because from passengers' point of view, whether it will cost more or how much more, safety is something that we must not compromise.

I was talking to the (Firefly) CEO just now. I told him to look at other destinations besides Subang to fly into Singapore, because I think this will be very good for our bilateral relationship, as well as grow our tourism sector in Malaysia.

Singapore had withdrawn the ILS earlier this month, while Malaysia has indefinitely suspended its permanent restricted area over Pasir Gudang - moves that paved the way for Firefly to resume services to Singapore.

Thanking Mr Loke for joining the flight, Mr Khaw said his counterpart's presence "signals the very strong bilateral relations between our two countries and also our two ministries". He also said he would find an opportunity to reciprocate the gesture in due course.

Asked about the costs of implementing the GPS-based system, Mr Khaw said instrument procedures "require some money" but did not give specifics.

He noted that pilots flying into Seletar rely on their vision for landing, which is possible most of the time but can be unsafe when there is inclement weather. "But with the instrument procedures, whether ILS or GPS, in this case GPS, I think we should be able to overcome such limitations," Mr Khaw said.

On whether the GPS system will cost more than the ILS, he said: "I don't think there's any loss in terms of safety. For us, the key point is safety.

"Because from passengers' point of view, whether it will cost more or how much more, safety is something that we must not compromise." 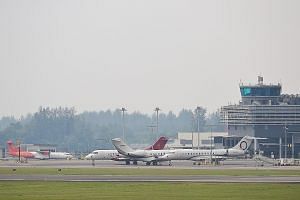 Like the ILS, GPS-based procedures allow planes to land under the guidance of instrument systems. This means planes can land even in bad weather when visibility is low, as pilots do not need to rely only on their vision for landing.

The difference is that the ILS receives signals from a ground-based station, and the vast majority of commercial aircraft are already equipped to use the technology.

GPS signals are received from a satellite, and experts had said that airlines would typically require some time to outfit their planes with the necessary equipment.

Firefly had suspended all services to Singapore in December last year after the airline failed to obtain approval from its regulator to move from Changi Airport to Seletar, which it had earlier agreed to do.

Malaysia's civil aviation authority had claimed that the introduction of ILS procedures at Seletar Airport would affect developments at the nearby town of Pasir Gudang, and later announced a permanent restricted area over it. Both countries subsequently took steps to defuse the airspace dispute.

Yesterday, Firefly chief executive Philip See said the airline will either retrofit its fleet of 12 turboprop planes to be ready for the GPS-based approach, or adopt "substitute technology". But it will monitor the outcome of regulatory discussions before deciding on which option to take, he said.

According to earlier reports, Firefly was projected to incur monthly losses of up to RM20 million (S$6.6 million) due to the suspension of its direct flights to Singapore from Subang Airport, near Kuala Lumpur.

Asked about Firefly's losses, Mr See declined to reveal the size of losses the airline has incurred, but said utilising its assets is key for the turboprop business.

Firefly used to operate nine to 11 flights between Subang and Changi daily.

"We believe that with Seletar in place, we should at least move towards (the break-even point) relatively fast, and then move to sustainable profitability in a relatively short period of time," he said.

Mr Loke said Firefly will also study the feasibility of resuming its services from Kuantan and Ipoh to Singapore, and explore the possibility of launching new routes, such as between Singapore and Malacca.

Speaking at a joint press conference with his Malaysian counterpart Anthony Loke at Seletar Airport, Mr Khaw noted that while the bilateral agreement for the Rapid Transit System (RTS) Link has no provision for a suspension, a supplementary agreement can be worked out "in the spirit of bilateral cooperation".

This was similarly done for the Kuala Lumpur-Singapore High-Speed Rail (HSR) project, he said.

Both transport ministers had, after their meeting on April 8, said that Singapore and Malaysia are working towards a supplementary agreement to suspend the RTS Link for six months.

In the case of the HSR, both countries had agreed to suspend the project for two years, with Malaysia paying Singapore $15 million for abortive costs incurred as a result.

Malaysia has requested to suspend the 4km RTS Link so it can review key parameters of the project.

"At this point in time, we are still committed to ensuring that the project can continue," said Mr Loke, who added that Malaysia is looking at "various options" on how to reduce the cost of the RTS.

The RTS Link was slated to start operating by Dec 31, 2024. However, the service is no longer on track to commence by that date.

Malaysia has sought several extensions on a deadline to confirm its partner for the joint venture operating company.

On April 8, Mr Loke had said that "there is some cost involved", when asked if Malaysia would need to pay compensation to Singapore if the RTS is suspended. This will be determined by a review, he had said.