SINGAPORE - The recent shutdown of oBike in Singapore has left thousands of its rental bicycles strewn around the island, but town councils are looking to take action.

Dr Teo Ho Pin, coordinating chairman of the 15 town councils run by the People's Action Party, told The Straits Times on Wednesday (June 27) that if the bicycles are abandoned, the town councils will discard them after giving due notice, based on their by-laws.

"This is to ensure safety and safeguard the interests of our residents," Dr Teo added.

He said that there would be no additional costs involved as disposing of the bicycles would be part of the town councils' conservancy work.

It remained unclear, however, when the oBike bicycles, which number at least 14,000 here, would be considered as abandoned.

The Chinese-founded operator made a surprise announcement on Monday that it was ceasing operations in Singapore, citing the difficulties it foresaw in meeting upcoming Land Transport Authority licensing requirements.

But since its announcement, the operator has been silent on when it will remove them, or if it will refund the deposits of up to $49 each user paid to utilise the service. 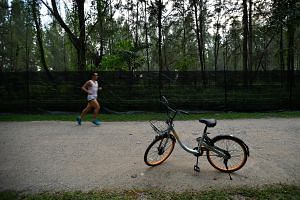 Pasir Ris-Punggol Town Council chairman Zainal Sapari said it was awaiting clearer instructions from the Land Transport Authority (LTA) before deciding what to do with the bicycles.

The LTA said on Monday that it "will be engaging oBike on their exit plans, including the removal of shared bicycles from public places". The authority has not provided any updates since then.

Ang Mo Kio Town Council chairman Ang Hin Kee said that if oBike had an appointed liquidator, it was now legally in charge of the bicycles, which are assets.

"We will try to contact oBike or its liquidator to manage discarded bicycles and outstanding fines. If we do not get a response, we may have to place them in storage, to avoid inconvenience to residents," Mr Ang added.

Bicycles left in a derelict state and unclaimed by residents are often sold to scrap metal dealers, according to a former town council manager, who declined to be named.

Town councils would typically give a notice period of a few weeks to a month, he added.

Metallon Recycling, a firm which purchases discarded bicycles for scrap metal, said the going rate was about 35 cents a kg. This works out to about $5 for a bicycle weighing 15kg.

Ms Jasline Neo, Metallon Recycling's director, said it has taken in batches of discarded bicycles from dormitories and condominiums before, but has not been approached yet to buy over any unwanted shared bikes.

The grey and yellow-coloured bikes have become eyesores for many people.

Retiree Richard Toh, 66, who lives in Toa Payoh, said: "Leaving the bikes here is not a solution as they can easily topple over, which is unsightly. With bikes being abandoned all over - along bus stops and pathways - it makes Singapore look untidy."

He said: "A win-win situation can be achieved by unlocking the bikes and distributing it to the customers who have lost their deposits."

The Consumers Association of Singapore (Case) said that as of 5pm on Wednesday (June 27), it has received 595 complaints from consumers asking for a refund of their deposit with oBike. The majority of the complaints were lodged within the last three days, said Case.