Having a dedicated bus lane on the proposed 21.5km North-South Expressway (NSE) will be a first for the island's highways and is a welcome move, said transport experts.

Yesterday, Transport Minister Khaw Boon Wan announced that the NSE will be reconfigured as a "North-South Corridor" to facilitate the movement of cyclists, pedestrians and bus commuters.

While walking and cycling paths will be built along the entire corridor, one of the lanes will be dedicated to buses.

Transport consultant Gopinath Menon said: "It's a very good idea. We have been putting bus lanes on major roads, and never on expressways. Buses can carry many more passengers than private cars." 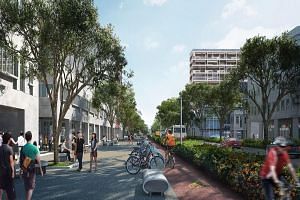 Pedestrians, cyclists to get 2 lanes on part of Bencoolen Street 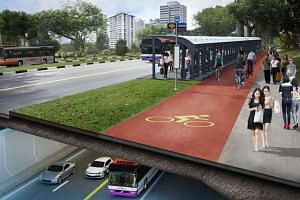 Mr Menon added that express bus services already use highways, and having a dedicated lane for buses will allow them to move faster.

However, he said that on the NSE, there must be special arrangements for cars filtering out of the expressway, as they would have to cross into dedicated bus lanes which would be on the left. As the NSE was originally designed to alleviate the congestion on the parallel-running Central Expressway (CTE), motorists have asked if giving up a lane to buses is feasible.

Mr Brandon Tan, 35, a shipping executive, said: "The CTE, which has four to five lanes, gets clogged up daily. I don't see how having a two-lane expressway will be useful."

Senior Minister of State for Transport Josephine Teo said yesterday: "It depends on how we manage the car population... It could be possible to have congestion-free roads and still meet the needs of cyclists and those who use public transport."

Commuter Charles Patrick, 31, who takes buses which use the expressway, said it is not uncommon for cars and other slower-moving vehicles to compete with the buses for space. That's why the idea of a dedicated bus lane appealed to him.

SIM University adjunct associate professor Park Byung Joon said that compared to driving on a regular three-lane expressway, motorists using the NSE may see their journey times increase, because one lane is reserved for buses.

"But by giving buses the priority, they will be quicker, and this will attract more people to use the bus instead of the car," Dr Park added.