SINGAPORE - Travel on the Circle Line will continue to be disrupted, even as the Land Transport Authority (LTA) and rail operator SMRT are "working round the clock" to fix the signalling faults that have left commuters complaining since Monday (Aug 29).

In a joint statement on Thursday (Sept 1) morning, LTA and SMRT said that they are working with a team from train manufacturer Alstom but their hands are tied by the inability to conduct trackside checks and examine equipment while the line is running.

This can only be done after operating hours, the statement said.

At 6.56am on Thursday, SMRT tweeted that commuters should expect "longer dwell times at stations" before trains move off from the platform.

SMRT and LTA also advised commuters to plan ahead for longer journeys in order to arrive at their destinations punctually.

In the meantime, they say that more staff will be deployed at stations and on trains in case commuters want to find an alternative mode of transport and need help. 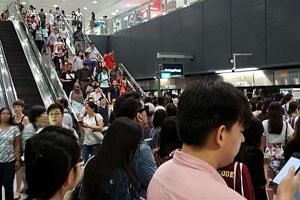 Train service on the Circle Line has been spotty all week so far.

Commuters first reported problems with the Circle Line during morning rush hour on Monday, taking to social media to complain of stalled trains and crowded platforms.

It was not until Monday afternoon that SMRT responded, pointing the finger at "intermittent signalling issues".

[CCL] Due to intermittent signalling issue, please
cater for additional travel time on the CCL today.

[CCL] Due to intermittent signalling issues, train may have longer dwell times at stations. Pls cater for longer travel time.

What's the situation on the escalators at Bishan MRT ? It's been 3 working days ! #smrt #crowd @SMRT_Singapore pic.twitter.com/ZwER5BB7X5

Circle Line, please get your act together 🙄 I don't particularly enjoy my commute to work as it is 😪 pic.twitter.com/KaQcyFmubF

The problem has since been pinned down to "signal interference" that hampers communication between trains and stations when the wireless signal is lost.