SINGAPORE - The Electronic Road Pricing (ERP) rates for some gantries located along three expressways will be raised by $1 following an increase in the number of people heading back to workplaces.

The Land Transport Authority (LTA) said on Monday (Feb 15) that the increased charges will kick in from next Monday.

Drivers going on the AYE after Jurong Town Hall towards the city will face a $1 charge between 8.30am and 9.30am at the set of three gantries along the route.

Those driving on the KPE (East Coast Parkway) after Defu Flyover will have to pay a $1 fee between 8.30am and 9am.

Currently, drivers use these routes for free.

Meanwhile, drivers heading south on the CTE before Braddell Road will have to pay $2 between 8am and 9am, up from $1 currently. Those driving on the same route between 9am and 9.30am will have to pay $1, instead of being able to do so for free.

Those driving south on the CTE after Braddell Road and from the Pan-Island Expressway (PIE) slip road into southbound CTE will have to pay $1 at the set of four gantries along the route between 8am and 8.30am.

Lastly, those driving southwards on the CTE auxiliary lane to PIE (Changi)/Serangoon Road will have to pay a $1 charge between 8am to 9.30am.

LTA said that the rates for other time slots at previously announced gantries remain unchanged.

It added that there will continue to be no ERP charges on other expressways and arterial roads. Traffic speeds have remained generally optimal on all arterial roads and most expressways, LTA noted.

"LTA will continue to monitor traffic speeds and congestion levels closely and assess if ERP rates need to be further adjusted," the authority added. 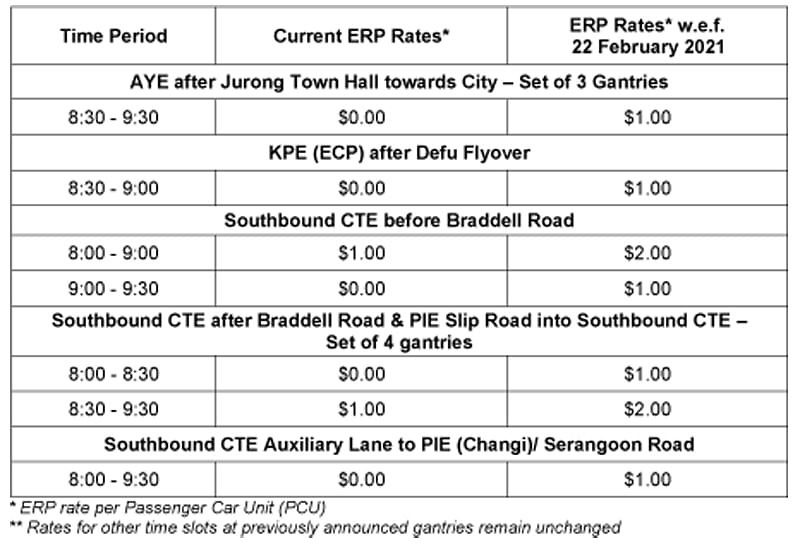 More On This Topic
'Premature' to decide on lowering road tax when ERP 2.0 rolls out
10 things you should know about ERP 2.0