From 2020, Singapore's streetscape will look different in one respect - the blue-and-white Electronic Road Pricing gantries dotting the Central Business District and major highways will be dismantled.

The next-generation ERP system will rely on satellite navigation technology to keep track of the vehicle population. That means the entire island is covered.

In fact, that is one of the reasons the LTA is replacing the current gantry-based system. There are 70-plus gantries in use today, and erecting more may be visually intrusive. Maintenance is also becoming a costly affair, the authority said. 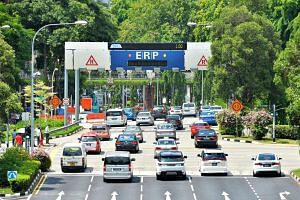 10 things to know about the next-generation ERP system

The new system makes use of a smartphone-size, on-board unit that communicates with a central computer system via a dedicated 4G cellular network. It informs motorists of a priced road ahead, as well as the charges, allowing them enough time to switch routes.

Each vehicle is tracked by satellites orbiting the Earth. Payments are made either upfront using stored-value cards in the on-board unit, or through monthly deductions via Giro or credit/debit cards.

Vehicles without an on-board unit or valid payment mode will be captured by the enforcement cameras.

As it is a wireless, gantry-less system tracked by satellites, charging does not have to be confined to fixed locations, but can be dynamic. This means motorists can be charged for the distance they clock.

Mr Chua said these functions will not be rolled out immediately when the system is up in four years' time.

"There will already be a lot of new things for motorists to get used to. So we don't want to do too many things at one time," he said.

National University of Singapore transport researcher Lee Der-Horng concurred. "This system is the only one in the world. There will be systemic issues that the authority and vendor have to deal with," he said.

The new system is not just a congestion tool. It will also facilitate coupon-less street-side parking and automatic charging of off-peak car usage. It will also push out real-time traffic information to all road users through the on-board unit.

Mr Chua added that, armed with the information, motorists might even decide not to drive to a particular location at a particular time, and use public transport instead.

The LTA said there will be an 18-month migration period from the current system to the new one.

During this period, motorists will swop their current ERP in-vehicle units for new on-board units. The cost of the first unit, plus installation, will be borne by the LTA.

As for when distance-charging will be implemented, the LTA would not say. LTA chief executive Chew Men Leong would only say "this is something we actually have to examine and consider" after the new system is in place.