In a Facebook post, he said the cost of construction of the depot is about $3.2 billion, 40 per cent less than what it would have cost had the four depots been built separately.

He also noted that building the depots separately would have used up an additional 44ha of land, twice the land size of Changi Airport's Terminal 4.

The depot, scheduled to be completed in 2024, will include depots for the East-West and Downtown MRT lines, as well as the upcoming Thomson-East Coast Line.

The train depot complex will comprise three levels, with the Downtown Line depot located underground, the Thomson-East Coast Line depot at ground level, and the depot for the East-West Line above that.

The three train depots have been designed to operate independently of one another, said a spokesman for the Land Transport Authority (LTA).

"Careful planning has been done for them to share the same layout so that MRT lines with different numbers of train cars can be stacked on top of one another," the LTA added, noting that the depot can house around 220 trains.

A bus depot, which can house 760 buses, will be located next to the MRT depots.

Mr Khaw credited LTA rail engineer Adrian Teo and his project team for the depot, said to be the first such facility of its kind. 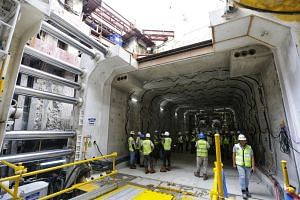 Mr Teo's team was tasked with building train depots for the Thomson-East Coast Line and Downtown Line in 2009.

Mr Khaw, who is also Coordinating Minister for Infrastructure, said the team succeeded in coming up with an "out-of-the-box creative solution" that was "future-proof, safe and also cost effective".

"The East Coast Integrated Depot was the team's innovative answer to our growing infrastructure needs in land-scarce Singapore," he said.