SINGAPORE - On their electric scooters (e-scooter) and unicycles, the riders travelled alongside cars and motorcycles on the roads in Geylang, openly flouting the law.

One of these Personal Mobility Device (PMD) users even zipped across the four lanes of Geylang Road, speeding ahead of the vehicular traffic as the lights turned green.

Such was the situation observed by The Straits Times at around noon on Wednesday (Jan 3). Within the span of an hour, a total of six PMD users were seen riding on Geylang Road and Sims Avenue.

PMD users who take their devices onto the roads will face stiffer penalties from Jan 15, the Land Transport Authority (LTA) announced Tuesday, in a bid to curb the growing appetite for risk, which resulted in several fatal accidents last year (2017).

From a fine of $100, first-time offenders will now have to pay a $300 penalty if caught riding on local roads; $500 on major roads; and a court appearance if found riding on expressways.

While Geylang appeared to be a hot-spot area for errant PMD users, riders in other parts of Singapore, such as Yishun and Ang Mo Kio, seemed to be more law abiding.

When ST spent an hour each at these town centres on Wednesday afternoon, PMD riders were seen keeping to pavements and cycling paths, with only one e-scooter rider spotted along Ang Mo Kio Avenue 8. 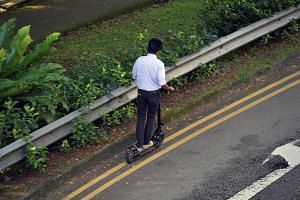 The problem of PMD users on roads has raised the concerns of road safety experts and Members of Parliament.

In a Facebook post on Wednesday, Associate Professor Muhammad Faishal Ibrahim wrote: "The reckless and illegal use of PMDs endangers riders and other road users alike. This is something that I am personally concerned about."

But his good intentions drew negative reactions. "They didn't seem to appreciate the advice, and continued to ride on the road. There were people who also told me off, and to mind my own business," Prof Faishal said.

"Actually, when people point you in the right way, it's because they care and want to promote safety."

Last November, a 52-year-old man using a PMD died in an accident with a bus in Kaki Bukit. In the same month, another man was arrested for riding an e-scooter on the Pan-Island Expressway.

According to LTA data, an average of 40 errant PMD users were caught on the roads each month last year, up from 34 in 2016.

Members of the public and motorists are also reporting more encounters with PMD riders.

Taxi driver Ng Beng Huat, 65, said he nearly collided with an e-scooter user in Tampines recently. Mr Ng said he was about to make a left turn, when the rider dashed out from beside him.

"If I didn't jam on the brake, there would be an accident. Even when they are wrong, it will become your fault. Drivers have to be careful," Mr Ng said.

Sales assistant David Chew, 50, who lives in Pasir Ris, said he sees e-scooter users taking to the roads in the evenings, especially along Street 11. "It's a quiet street and the riders can go very fast," Mr Chew said.

Authorities are hoping to cultivate more users like university undergraduate Chan Chan Leong, 28, who has been using an e-scooter for the past four months, and rides only on pavements. "I don't want to die, and it's also illegal to be on the roads," Mr Chan said.