SINGAPORE - Downtown Line 3 (DTL3), will open on Oct 21, completing a three-stage 42km MRT line that links the north-western and eastern towns to the old and new downtowns.

The 21km, 16-station DTL3 runs from Fort Canning station, which is directly across from Liang Court, and goes through old town areas such as Jalan Besar and Bendemeer before heading eastwards through Geylang Bahru, MacPherson , Ubi, Bedok North, Upper Changi neighbourhoods, before ending at Expo station.

New interchanges on this section of the Downtown Line include an interchange with the Circle Line at MacPherson and interchanges at Tampines and Expo with the East-West Line.

When service starts, commuters will be able to travel from Tampines to Kaki Bukit in 10 minutes - less than half the 25 minutes by bus today.

The entire project started in 2007, when tenders for Downtown Line 1 was called. 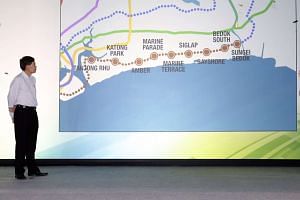 The construction of DTL3 involved a number of challenges, the biggest of which was diverting the Singapore River - twice - to build tunnels linking Fort Canning and Bencoolen stations.

Transport Minister Khaw Boon Wan wrote in a Facebook post on Wednesday: "With each new line and new stations, we try to make sure that we further upgrade their design, taking advantage of new technology and innovations. DTL3 is no exception. It has several notable features that are testament to the ingenuity of our engineers."

He gave the example of the design and treatment of ventilation shafts and cooling towers which in the older train lines are " no-frills standalone facilities which could be quite an eye sore".

For Downtown Line 3, the ventilation shafts and cooling tower at Bencoolen station are integrated into the design of new buildings and were made "invisible".

" By doing so, we made the environment more pleasant and also made better use of land," said Mr Khaw.