SINGAPORE - Hundreds of people took rides on the newest MRT line on Saturday (Dec 5), when Downtown Line 2 (DTL2) opened to the public for the first time ahead of its official opening on Dec 27.

They could travel for free between 10am and 6pm and explore the layout and amenities of its 12 stations as part of the Line's open house.

At six stations, commuters were treated to games and activities hosted by celebrities such as Irene Ang, Glenn Ong and Chua En Lai.

The Botanic Gardens Station had a photo exhibition, while the Little India station offered pinball games. Roaming around the stations were life-size mascots of Move-In Martin, Give-Way Glenda and Stand-Up Stacey - cartoon characters from a Land Transport Authority (LTA) campaign to promote thoughtfulness on public transport. 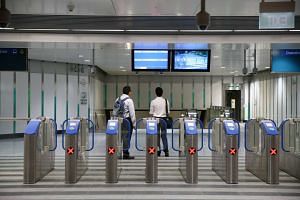 By 9.45am on Saturday (Dec 5), more than 20 people had gathered outside Beauty World Station. Among them was programme manager Irene Tay, 43, who had sold her car in October in anticipation of the Line's opening.

She intends to take the train from her King Albert Park home to her office at Alexandra when the new line opens. Her two daughters, who study at Singapore Chinese Girls' School, will be able to wake up 25 minutes later, as the new Stevens station is walking distance from their school, she added.

"Traffic is usually bad in the morning and there's a whole line of cars waiting to drop their children off at the school. It'll be faster by train," she said.

Senior Minister of State for Transport Ng Chee Meng, who rode the DTL2 and visited six stations, said the general feedback he got from commuters was that it was "very very convenient". 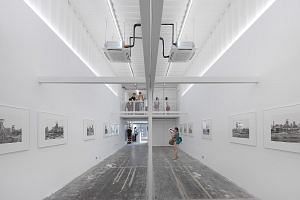 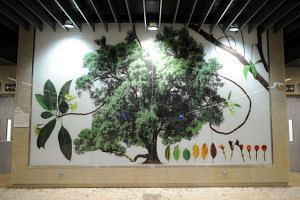 "It will serve the whole stretch of residents very well," he added.

Upon its launch on Dec 27, the DTL2 will connect commuters to the existing six-station DTL1 that now takes riders to the Marina Bay area.

Commuters can travel the entire Downtown Line for free from Dec 27 to Jan 1. They need only start and end their journey at any of the 18 DTL stations to enjoy free travel, the LTA said.