Monday's four-line rail breakdown brings into focus once again weaknesses in the network's power system - weaknesses flagged just days before the latest incident by an expert panel, which called for urgent steps to be taken.

The breakdown - which affected as many as 100,000 people whose journeys were disrupted or delayed - was caused by a power trip at the Buona Vista power intake station.

The facility draws 66kV of electricity from the power grid and steps it down to 22kV before distributing it to substations in the rail network.

But why the trip occurred is still being investigated.

Government Parliamentary Committee for Transport chairman Sitoh Yih Pin said recommendations made by a panel of 13 power experts "should be looked into urgently".

The panel was assembled four months ago to check the rail network's power system following a spate of electrical glitches. 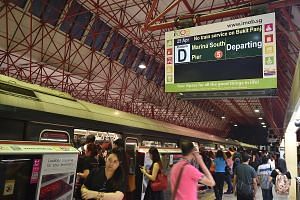 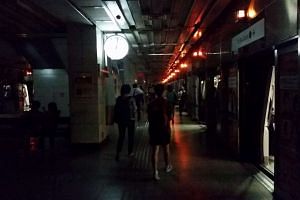 All affected stations without power except for emergency lights

One of the panel's recommendations was to "enable automatic switchover to (an) alternative 66kV power supply intake, in the event of a loss of primary 66kV intake".

Associate professor Tseng King Jet of Nanyang Technological University's School of Electrical and Electronic Engineering said: "Today, this switchover is done manually. You must call for permission, then someone must go down and do it. This takes time, at least half an hour. This is for safety."

But Dr Tseng - who was part of the 13-member panel - said an automatic switchover can be done without compromising safety.

"To be fair, we need to be sure if the fault lies with the intake station," he said. "In a power system, no two faults are exactly the same."

Power-related breakdowns have been creeping up ever since the operators started adding trains to cope with rising demand.

Besides Monday's multi-line incident and the disruption yesterday of nearly 30 minutes affecting south-bound train service on the North-South Line, major power-related incidents in recent months include a power trip which paralysed the North-South and East-West Lines (NSEWL) during the evening peak period on July 7 last year.

SIM University Adjunct Associate Professor Park Byung Joon said: "The incidents seem to be occurring in a series. And they seem to be starting to affect multiple lines all at once. It is not a good sign."

Dr Tseng noted SMRT's power system is "very old... it was built in the 1980s", and SMRT is "working hard" to upgrade the system. "This takes time because the upgrading is done on an operating system," he said.

Meanwhile, Singapore Power has confirmed the power grid's "supply to SMRT and other installations was in order on Monday evening".

The Land Transport Authority (LTA) said it is working with SMRT to investigate the cause of Monday's power faults.

The Buona Vista power intake station supplies power to the western sector of the NSEWL and parts of the Circle Line. As the Bukit Panjang LRT system receives power from the same source through Choa Chu Kang on the NSEWL, it was similarly affected, said the LTA.

Checks showed that the circuit breaker trip was not due to a power dip, but a power fault within the western sector of the NSEWL.