A "digital twin" of the upcoming Tuas Terminal mega port is being developed to help researchers evaluate the impact different layout designs and concepts can have on the efficiency of port operations.

The simulation is one of several projects that is being developed at the newly launched Centre of Excellence in Modelling and Simulation for Next Generation Ports (C4NGP).

The $18-million centre uses simulation analytics and artificial intelligence to optimise operations, such as how to move the most number of containers in the least amount of time.

The digital twin can also be used to simulate potential disruptions to operations at the Tuas Terminal mega port, which will open from 2021. Such disruptions include natural disasters and extreme weather events.

Senior Minister of State for Transport and Health Lam Pin Min officially opened the maritime research centre, which is based at the National University of Singapore (NUS) in Kent Ridge, yesterday.

Seven memorandums of understanding were also signed at the event, between the centre and seven industry and research partners, to jointly develop digital twins of next-generation port, land, and sea systems.

The research centre, part of NUS' engineering faculty, will help Singapore's maritime and port industries to develop innovative capabilities, and also work with companies in the sectors to improve their technical know-how, efficiency and productivity.

Dr Lam said the centre is an important endeavour, as the port is "a cornerstone of our maritime ecosystem, connecting Singapore to more than 600 ports in some 120 countries". 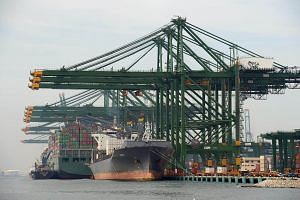 To cater for larger vessels and increased activities in port waters, the new Tuas Terminal is being built to expand port capacity.

The multibillion-dollar Tuas project - which will be twice the size of Ang Mo Kio town - will be opened progressively from 2021.

When fully completed by 2040, it will be able to handle up to 65 million twenty-foot equivalent units of cargo a year.

Added Dr Lam: "But we are not just building a larger port. We are building a smarter, more cutting-edge port. We are looking to deploy smarter systems and state-of-the-art technologies, as well as increase the degree of automation at the future Tuas Terminal."

The centre, which will eventually have about 20 researchers, is a collaboration between NUS and the Singapore Maritime Institute.

Associate Professor Chew Ek Peng, the centre's director, said that by collaborating with the partners, NUS will be able to deepen its research capabilities in modelling and simulation, as well as nurture talents for the industry.

"The long-term goal of creating a future-oriented digital maritime ecosystem will promote innovation and further enhance Singapore's competitiveness as a leading maritime capital," he said.