The visit was part of the Asean Transport Ministers Meeting that started on Thursday.

Sato Kogyo civil engineering general manager Hirotaka Onawa showed the delegation around the station, which was completed earlier this year.

Mr Onawa noted some of the unique engineering challenges the Japanese firm faced when building the Bencoolen Station which, at 43m below ground level, is the deepest MRT station in Singapore.

The station had to be constructed at such a depth because of buildings, as well as the existing North-South and Circle Line tunnels, which run above the Downtown Line.

In contrast, the deepest station for Tokyo's metro system, the Roppongi Station on the Toei Oedo line, is only 42.3m below the surface, he said.

Though Bencoolen Street was closed to traffic for five years during the construction of the station, construction work had to be done in close proximity to existing buildings. 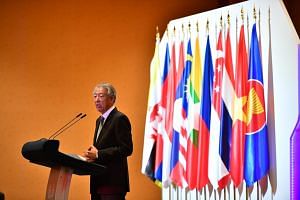 "We had to deploy a lot of machines within a very narrow space and, at the same time, keep up our productivity so as to complete the project on time," said Mr Onawa, adding excavation also had to be done in the hard Fort Canning boulder bed.