SINGAPORE - A train fault at Braddell MRT station on Wednesday evening (Oct 28) slowed down the service on the North-South line.

The disruption lasted for more than an hour.

Free bus service was available between Marina South Pier and Ang Mo Kio, it said in another tweet.

In an update at about 7.41pm, SMRT said that train services had resumed, though trains would be travelling at slower speeds.

[NSL] Train service has resumed. Trains are travelling at a slower speed due to an earlier train fault. Free bus service is still available.

Earlier on Wednesday, the service between Tampines and Pasir Ris stations was affected on the East-West line due to a track fault.

Free bus services were activated after the service was suspended for about 20 minutes in the afternoon.

At 3.10pm, SMRT said that train service had resumed on the East-West line, with trains travelling at a slower speed.

North-South commuter Nur Iffah, 24, said she had boarded the train at Novena at around 7pm. On the way to Toa Payoh, the train stopped and there was a blackout for about 10 minutes.

It was warm but the people inside were calm, she said.

After passengers were asked to alight at Toa Payoh, she boarded the next train, only to have it stall again for another 10 minutes towards Braddell.

Passengers were told to alight again at Braddell at around 7.17pm, and the patient service associate waited another 25 minutes before she could board a train to her final destination in Woodlands.

Marsiling resident Shirley Lim, 55, was travelling from Chinatown and changed to the North-South Line at Dhoby Ghaut. She first took the train to Marina Bay to get a seat, then travelled on the line towards Jurong East.

When the train reached Braddell, passengers were told to alight.

“They asked us to take a bus, but didn’t say from where. I was told there’s a free bus service to Bishan, but when I asked if there would be a train there,  they said no. I live in Marsiling, why would I want to go to Bishan?” said the sales representative.

Both bus stops nearest to Braddell station were packed with people, with many others lining the roads trying to hail taxis. 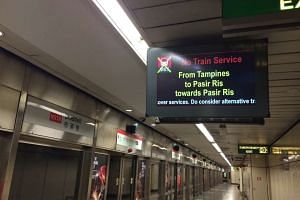 Signs were put up informing commuters of the bridging services.

For those going towards Marina Bay from the north, the train service fault did not seem that bad.

"The train stopped at Bishan for about five minutes before it reached Braddell," said software engineer Edmond Quah, 31.

But for those going north towards Jurong East, it was a frustrating commute.

Accounts executive Prema Clifton, 37,  was heading home to Yishun from Orchard when the train fault occurred.

She said the train on stopped many times on the way to Braddell before passengers were asked to alight.