SINGAPORE - Taman Jurong residents can now use a 5.6km-long cycling path that connects Lakeside and Chinese Garden MRT stations to get to schools, parks and markets in the area.

The path joins up to a 15km network at Jurong Lake District, allowing residents to reach amenities in Jurong East in less than 30 minutes, said the Land Transport Authority (LTA) on Saturday (Oct 30).

It said that these efforts are aimed at enhancing connectivity within and between towns, bringing more convenience to residents and improving path safety.

MP for Jurong GRC Tharman Shanmugaratnam, who launched the Jurong path on Saturday, said there is now more space for pedestrians and cyclists to travel together safely and comfortably side by side.

"This is timely as we have seen more residents walking and cycling over the past year, whether for exercise, leisure, to commute to work or to run errands in the neighbourhood," said Mr Tharman, who is also Senior Minister and Coordinating Minister for Social Policies.

Noting that Taman Jurong is a mature town with many open roadside drains beside footpaths, LTA said they collaborated with national water agency PUB to turn open drains into covered box drains.

Other features include bypass paths - shared paths for cyclists and pedestrians behind bus stops - to ensure safer interactions between both groups.

As for Tampines, cyclists can expect more paths to be launched along Tampines Avenue 1, 4, 5 and 8. This means Tampines will have 14km of cycling paths in total.

As more dedicated cycling paths are built islandwide, the authority is also seeking to improve safety near bus stops, such as by using speed regulating strips and bypass paths.

LTA said it will also roll out school zone markings on footpaths outside more than 250 primary, secondary and special education schools.

Signs and markings have been placed along the cycling path network to remind users to keep to their paths or slow down as they approach crowded areas.

"LTA will press on with complementary education and outreach efforts to promote safe, responsible and gracious riding," it said.

Taman Jurong resident and undergraduate Jeremy Chua, 24, who cycles weekly for leisure and to run errands, said he is looking forward to using the new cycling paths in the area.

“This is a good move for the community. Not only are more residents taking up cycling as a hobby due to Covid-19, but there are also quite a number of senior citizens living in Taman Jurong. The new path ensures safety for everyone – not just cyclists but pedestrians too.” 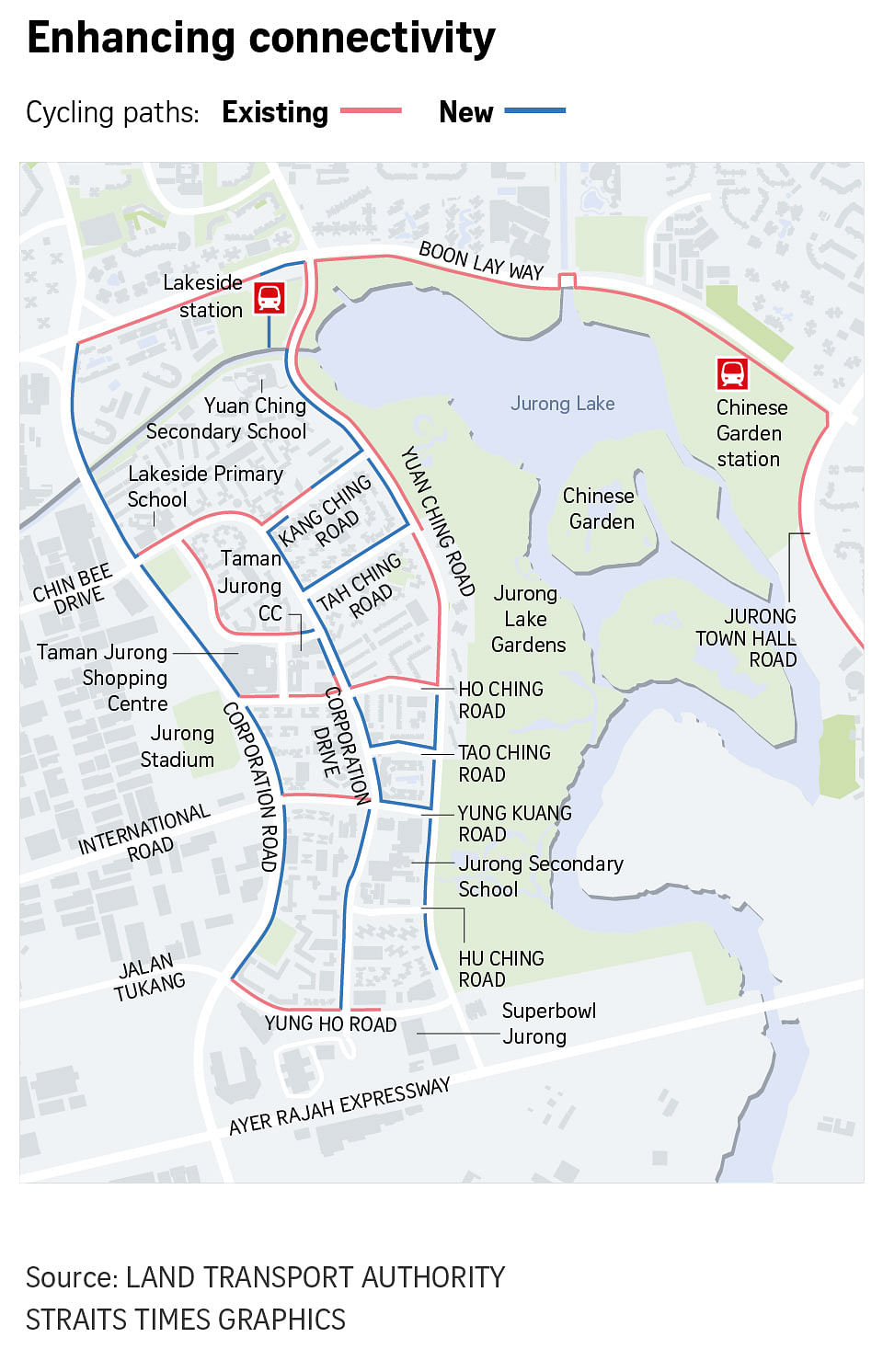 Extra 6.8km of cycling paths to be built near Mayflower and Lentor MRT stations by 2026

LTA to look at more paths for cyclists, pedestrians in central S'pore, Bukit Timah to Kallang