SINGAPORE - The couple caught on camera tossing oBikes into a drain have turned themselves in to the police, The Straits Times has learnt.

The man and woman were seen in a viral video circulating from Tuesday (Nov 21) pushing at least two bicycles into a drain by a flight of stairs.

Lianhe Wanbao said in a report on Saturday that they had in fact wheeled in three bicycles instead of just two.

Police told ST on Saturday that a 37-year-old man and a 36-year-old woman are currently assisting in investigations.

If found guilty of mischief, they can be jailed for up to a year and/or fined.

The incident is believed to have occurred on Sunday, between 4pm and 5pm, along Lower Delta Road.

Mr Edward Chen, co-founder and chief marketing officer of local start-up oBike, told ST that the firm learnt through the police about the couple’s “intention to apologise to us”. 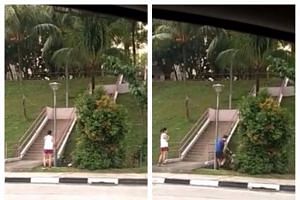 oBike told ST on Tuesday that it had filed a police report over the matter.

After footage of the incident was posted online, it went viral quickly, with debate in the comments section.

Some slammed the couple while others derided the clutter shared bicycles cause.

oBike, which officially launched in Singapore in April and later expanded to other countries, such as Malaysia and Australia, has filed five police reports so far this year on vandalism and abuse cases.

It has introduced several measures to prevent indiscriminate parking of its bikes.

Last month, it launched a geofencing feature to determine if the bicycles are parked within its bicycle parking zones around the island.

The feature creates a virtual boundary that can send out an alert when a bicycle enters or leaves an area.

It has also launched a cashback incentive campaign to reward those who move indiscriminately parked bikes, or bikes that are parked at obscure places.