SINGAPORE - Construction work on the second phase of the Tuas mega port began on Thursday (July 4), with the installation of the first of the concrete structures that form the wharves.

A total of 227 concrete structures or caissons, each weighing 13,000 tonnes, will be installed over the next eight years to form the largest of four wharves.

Almost 400ha of land will be reclaimed for the second phase, which will be able to handle 21 million 20ft equivalent units (TEUs) of cargo annually.

In April, the last of 221 caissons for the first phase of the mega-port project was installed.

Speaking at an event marking the installation of the caisson on Thursday, Senior Minister of State for Transport Lam Pin Min noted that innovative methods are being used in the construction of the second phase.

These include the use of prefabricated steel bars for the base slab of the caisson, which reduces the need for construction and assembly on site as well as improves safety for those working under the steel bars.

"These innovative construction methods helped boost efficiency and productivity of the whole process," said Dr Lam, who is also Senior Minister of State for Health.

He added that drones may also be used to carry out surveys of the reclaimed land, reducing the need for labour-intensive manual surveying works.

He also announced that the Maritime and Port Authority of Singapore's (MPA) current fleet of patrol vessels will be replaced by seven new patrol craft over the next three years. 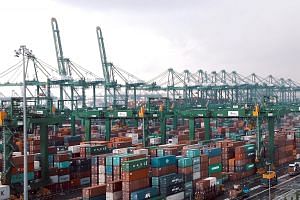 Harbouring ambition: 3 questions you may have about Singapore's ports moving to Tuas

The new craft will have enhanced navigation, surveillance and response capabilities to handle incidents that involve search and rescue or oil spills.

The first six vessels will be commissioned in February next year, while the seventh, larger vessel will be introduced by the first quarter of 2021.

The MPA will also add two patrol launches - a form of passenger craft - to its fleet, which are meant to keep the authority's surveyors safe as they conduct ship inspections.

Dr Lam also noted that as part of the digitalisation of Singapore's port, the first phase of the MPA's Maritime Single Window - a portal aimed at streamlining the processes of various agencies and easing port clearance for ships - will be launched by the end of this year.

When the new Tuas port is fully operational in the 2040s, it will replace existing facilities in Tanjong Pagar, Pasir Panjang, Keppel and Pulau Brani, and is expected to eventually handle some 65 million 20ft TEUs of cargo a year.

The relocation of the port to Tuas is something that will benefit industry, noted Dr Lam.

"The proximity of Tuas Terminal to the industrial hinterland and the shipyards forms a more integrated supply chain ecosystem," he said.

"This could reduce logistics cost, and create new opportunities for synergistic port-industry activities. The possibilities are immense."