SINGAPORE - Complaints about errant personal mobility device (PMD) users, with relevant photos, may soon be made through the MyTransport.SG app, the Land Transport Authority (LTA) announced on Thursday (June 20) as the July 1 deadline to register the devices draws near.

The LTA said it is enhancing the app to make it easier and more convenient for the public to submit a photograph or video of irresponsible riding behaviour, to facilitate more targeted and effective enforcement.

It has been collecting feedback on errant PMD riders through its website, which the LTA said has helped with enforcement efforts.

More than 75,000 e-scooters have been registered with the authority so far.

From July, it will be illegal for PMD users to ride, cause or allow another person to ride an unregistered e-scooter on public paths.

Those registering must be at least 16 years old, and will have to declare that their e-scooters do not exceed 20kg in weight and 70cm in maximum width.

The e-scooters' maximum motorised device speed should also be capped at 25kmh.

The LTA said that the registration scheme aims to deter reckless riding and facilitate enforcement efforts against errant riders, in order to improve public safety for all path users.

Those found riding unregistered e-scooters on public paths face fines of up to $2,000 and up to three months' jail for a first offence. 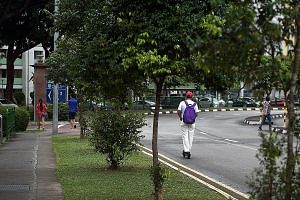 Dismount zones in housing estates being explored for PMDs, bikes

Nearly 130 PMDs seized in May for flouting rules

About 85 per cent of registrants are Singaporeans, and fewer than 5 per cent of all who have registered are aged between 16 and 20, the authority said.

"This highlights the diverse groups of people who have found such devices to be beneficial and convenient, especially for short journeys and first- and last-mile connectivity to our public transport nodes and amenities," said the LTA.

In its statement, it also reminded PMD retailers and users that the devices have to be UL2272 certified.

It said the certification would help to improve public safety and minimise the risk of fire incidents.

From 2021, all motorised PMDs on public paths must have that certification.

Existing owners of non-certified devices purchased before the end of this month can still register and use the devices until Dec 31 next year, after which they will be automatically deregistered.

But from July, the LTA will no longer accept registration and/or the transfer of registration for non-UL2272-certified devices.

It will also be illegal for retailers to sell and lease non-certified devices for use on public paths. First-time offenders can be fined up to $5,000 and jailed for up to three months.

"Public safety remains LTA's top priority as we encourage active mobility as a choice of commute in Singapore."

"LTA reminds all path users, including cyclists, PMD users and pedestrians to be gracious and to take safety seriously, to create a safe environment for all," the authority said.

He encouraged those who have not done so to do it before the end of the month.

Noting that the majority of PMD users do practise safe riding, Mr Koh said: "We should not let the actions of a few irresponsible ones tar the image of the broader community.

"Enhancements to make it easier for the public to report errant riders would also be very much welcomed."