SINGAPORE - Train commuters will, by the end of this year, have more flexibility in their rail journeys.

A change in the distance-based transfer rules will allow commuters travelling on different rail lines in a single trip, or those exiting and re-entering stations on the same MRT line, to do so without any penalty.

The Public Transport Council (PTC), in announcing this on Thursday (March 22), said that commuters will save time and money on their trips as they will not have to pay a separate boarding charge if they were to exit one MRT station and walk to another station on a separate or same line to continue their trip.

This will be permitted as long as commuters make the rail transfer between any two different MRT or LRT stations within 15 minutes.

Exiting and re-entering the same station, however, will still incur a new boarding charge. There is a boarding charge of 77 cents for tapping in and out of any station, even without any travel.

"With more rail lines opening in the coming years, there will be more instances where commuters may save time by using a combination of rail rides to reach their destination.

"These could include making a walking transfer between nearby stations and continuing their journey with another rail ride on a different rail line," said the PTC. 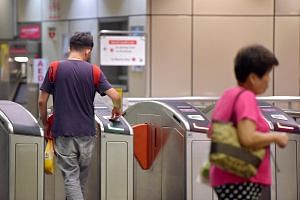 There are currently 18 pairs of train stations that are within 1km of each other, and this figure is expected to increase as the rail network becomes more dense.

The change to the transfer rules was announced along with changes to the fare formula. The PTC said the change in the formula was to ensure fares keep pace with the increased operating costs of the public transport system and ensure its sustainability.

The transfer rules change will benefit, for example, commuters on the Downtown Line, which runs from north-western Singapore, makes a loop in the downtown city centre, and then traverses eastwards.

A commuter travelling from Little India to Bendemeer stations on the Downtown Line can make the 7km journey in 20 minutes for $1.16.

However, he may also travel from Little India to Rochor stations, exit the system, walk to the nearby Jalan Besar station and continue the journey to Bendemeer. By doing so, he skips travelling the city loop. This 1.8km rail trip will currently incur a new boarding charge and cost $1.54, but with the change, it will cost only 77 cents. The estimated travel time is five minutes shorter.

The PTC said that there are at least 6,000 daily journeys which can have shorter travel times and lower fares, with the change to the transfer rules.

The change to the transfer rules will take effect together with the annual public transport fare adjustment at the end of this year.

It will also allow commuters to take a train, followed by a bus, and then a train again, without the additional rail boarding charge.

Other distance-based transfer rules, which were introduced in 2010, will continue to apply. These include a maximum of five transfers within a single journey, and a grace period of 45 minutes for transfers between a rail station and a bus service.

All journeys must also be completed within two hours of the first boarding.

Being able to bypass the Downtown Line city loop by walking from Rochor to Jalan Besar without paying the boarding charge would be beneficial for her, said the 41-year-old engineer.

“She can easily save 20 to 30 minutes by doing so. It’s quite substantial,” Mr Lee said.