SINGAPORE - Commuters are less satisfied with MRT train services, compared with a year ago, while taxi and public bus services see an increase in customer satisfaction levels.

This is according to the second-quarter Customer Satisfaction Index of Singapore, which was released by the Singapore Management University's Institute of Service Excellence (ISE) on Wednesday (Sept 27).

The study, which assessed customer satisfaction levels for the land and air transport sectors, was conducted from April to July, and polled a total of 6,750 people, comprising 4,300 Singaporeans and permanent residents, and 2,450 tourists.

While "reliability of trains" saw a year-on-year decline in satisfaction rating, other attributes such as "sufficiency of train arrival information" and "helpfulness of staff" had improved ratings.

Mr Chen Yongchang, head of research and consulting at ISE, said: "It is clear that commuters' perceptions of quality relate to whether train operations are well managed, to get them to their destination in an effective manner." 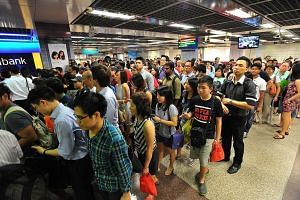 Focus on people, not just numbers, in rail reliability

In particular, customer satisfaction for the MRT system in July this year was found to be significantly lower relative to the preceding months of April, May and June.

The study correlated the decline with the commencement of weekday signalling tests at the end of May.

Professor Lee Der-Horng, transport researcher at the National University of Singapore's Department of Civil and Environmental Engineering, said the main reason for July's dip in ratings is likely to be the delays resulting from the signalling project that the MRT system is undergoing.

While he thinks that train operators are now more experienced in handling train disruptions, such as in deploying manpower for better crowd management, he said that the "main goal is really to eliminate unexpected delays" to win back the favour of commuters.

Public buses, on the other hand, registered a score of 64.9 points - a 2.23 point increase year on year.

While taxi services scored 71.8 points, a year-on-year rise of 1.85 points, ratings for the attribute "comfort of the ride" fell. Local respondents also rated taxis lower on that attribute, compared with private-hire cars.

The study also revealed that locals were more satisfied with budget airlines this year, compared with last year, with attributes related to flight experience such as "comfort of the journey" strongly impacting their perceived quality of budget airlines.

Changi Airport experienced a year-on-year dip in satisfaction ratings by 4.23 points to 77.1 points. Mr Chen said this is due to a drop from a spike in 2016's results, and that the ratings this year are not below those of 2014 and 2015.