SINGAPORE - The signalling interference that caused train service disruptions on the Circle Line (CCL) on Wednesday (Nov 2) morning could be similar to the week-long series of mysterious delays that plagued the same MRT line in September.

A joint statement by the Land Transport Authority (LTA) and CCL operator SMRT on Wednesday afternoon said preliminary investigations indicate the possibility of an interfering signal that could have disrupted communications.

Should similiar signalling faults occur, LTA and SMRT said they have arranged with the Infocomm Media Development Authority (IMDA) and mobile network operators to suspend telecommunication signals along stretches of CCL for short periods of time to assist in investigations.

They did not specify how long the suspensions would last, or which stretches would be affected.

A similar suspension of mobile services was imposed on the evening of Sept 2 at four stations - Kent Ridge, Haw Par Villa, Pasir Panjang and Labrador Park - for two hours.

The line had experienced an interfering signal throughout that week, which caused slower train service, sudden braking and stalled trains. 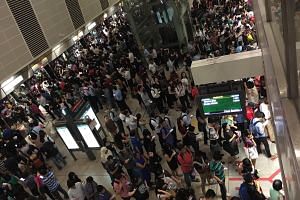 On Wednesday, SMRT first alerted commuters to an "intermittent" signal fault at around 7.30am, which resulted in a number of delays along the network.

It also caused a train to stall between Marymount and Botanic Gardens stations in the direction of Dhoby Ghaut, leading to the disruption of service between Botanic Gardens and Serangoon stations till about 10.30am.

As a precautionary measure, LTA and SMRT said all CCL trains will be manned during evening peak hours for faster response and recovery. Additional manpower will also be deployed at train stations to assist commuters.

The authorities added that following the delays in September, there had been no occurrence of similar signalling faults until Wednesday morning.

LTA and SMRT had also commenced feasibility studies to strengthen the existing signalling communications network, including exploring placing an electromagnetic field on the train to minimise the impact of interfering signals, changing the signal system frequency and/or modifying the system to provide redundancy.

The source of the interfering signal has not been established.