It was a busy first half of the year for Changi Airport, and industry experts say it could be heading for another record-breaking year.

Not only were more people travelling between January and June, but airlines also continued to add new flights and destinations.

In all, Changi handled 32.1 million passengers during the period, 5.5 per cent higher than the corresponding period last year.

In 2017, 62.2 million passengers walked through Changi's gates, making it the world's sixth-busiest airport for international traffic.

Reporting its first-half tally as it unveiled June's numbers, the Changi Airport Group said yesterday that total passenger traffic last month hit 5.57 million, a 6.9 per cent jump from the same month a year ago.

Particularly strong was the demand for Singapore-Europe flights, with passenger traffic growing by almost 20 per cent year on year.

This was due in part to LOT Polish Airlines starting a new Singapore-Warsaw connection last month.

Other airlines, including Australia's Qantas and Germany's Lufthansa, have also added new flights to and from Singapore.

During the six months, aircraft movements also rose by 4.2 per cent to 190,970 take-offs and landings, while airfreight volumes grew 2.7 per cent to 1.04 million tonnes.

Traffic should continue to be at least as strong in the second half of the year, said Mr Brendan Sobie, a Singapore-based aviation analyst at the Centre for Aviation.

"We expect to continue to see double-digit growth in the Europe market until the early part of next year... Changi grew its passenger traffic by about 6 per cent in 2016 and 2017, and it should be about the same again this year," he said. 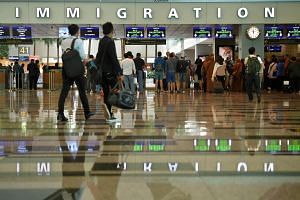 Busy first half of the year for Changi Airport, another record breaking year on the cards

Ms Alicia Seah, Dynasty Travel's director of marketing communications, said: "We are seeing very strong booking figures and growth for year-end travel. Typically, the second half of the year accounts for about 65 per cent of our total annual revenue, so there will definitely be more activity at Changi Airport as well.

"Apart from current scheduled services, we are also preparing for special charter and additional flights that airlines will be mounting to Japan, South Korea and Taiwan later this year," she added.

A version of this article appeared in the print edition of The Straits Times on July 25, 2018, with the headline 'Changi flying high with more travellers in first half of year'. Subscribe
Topics:
More
Whatsapp Linkedin FB Messenger Telegram Reddit WeChat Pinterest Print Purchase Article Copy permalink