SINGAPORE - Changi Airport has been voted the World's Best Airport by air travellers at the 2017 World Airport Awards for the fifth year in a row.

In all, this is the eighth time that Changi Airport has picked up this top international title at the World Airport Awards since it was introduced in 2000.

Changi Airport was also named the Best Airport in Asia, and Best Airport for Leisure Amenities, the latter a title it has held since the award category was introduced in 2009.

However, it did not clinch the title of World's Cleanest Airport, an accolade that went to Tokyo's Haneda airport. Singapore is ranked sixth in this sub-category, a drop of two places from 2016.

The 2017 World Airport Awards are based on 13.82 million customer nominations across 105 nationalities of air travellers, with 550 airports worldwide taking part. The survey evaluates customer satisfaction across various key performance indicators for airport service and product - from check-in, arrivals, transfers, shopping, security and immigration, through to departure at the gate.

Five consecutive years! 😍 Thank you for this honour. #WorldsBestAirport pic.twitter.com/qqDCrzvO0f 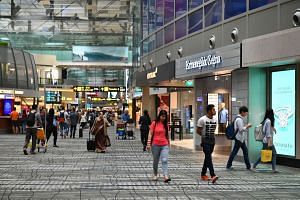 Changi taps mobile beacons to stay in the lead

Mr Lee Seow Hiang, CEO of Changi Airport Group said: "Winning the Skytrax World's Best Airport Award for the fifth consecutive year is immense encouragement to our 50,000-strong airport community at Changi Airport, every one of whom is passionate about delivering the most memorable airport experience to our passengers.

"This recognition affirms our service belief which we have held steadfast all these years - putting passengers at the heart of all we do. While we expand our facilities to serve more passengers in the coming years, we will continue to work closely with all our airport partners to further enhance the Changi Experience."

Mr Edward Plaisted, CEO of Skytrax said: "To be voted the world's Best Airport for the fifth consecutive year is a remarkable achievement for Changi Airport, and underlines the airport's popularity with international air travellers. Changi Airport continues to innovate product and service facilities for customers, and is making the travel experience at the airport enjoyable and relaxing. This award is very much a collective recognition for all staff at the airport who contribute to the success of Changi Airport operations."