Aircraft movements increased by 3.4 per cent to 386,000 landings and take-offs while cargo volumes rose by 1.4 per cent to reach 2.15 million tonnes.

The figures released by the Changi Airport Group (CAG) on Tuesday (Jan 29) confirmed a Straits Times report a day before that overall traffic at Changi Airport last year exceeded 65 million.

The group said that December was once again the busiest month of the year with a total of 6.13 million passengers handled.

The busiest day of the year was Dec 21 - the Friday before Christmas - with 221,155 passengers passing through Changi's terminals; a new daily record for the airport.

Among Changi's top 10 markets, India and Japan registered the strongest growth of 12 per cent and 10 per cent year-on-year respectively.

This was followed by China and Vietnam which saw annual growth of 7 per cent.

Outside Asia, connectivity to Europe strengthened with non-stop links to Warsaw and Berlin, CAG said.

Today, Changi Airport is directly connected to 19 cities in Europe, a 10-year high. 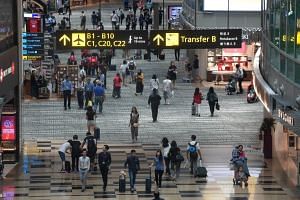 Changi Airport passenger movements up 4.5% to 5.4m in November

Decades of groundwork for T5 to take flight

This includes the 'Changi Stopovers' programme, in partnership with the Singapore Tourism Board, which encourages passengers travelling through Changi Airport to stop over in Singapore.

CAG has also embarked on a new initiative to work with travel agents to offer flight charter services to new destinations in China, such as Guiyang and Zunyi.

Charter services to other Chinese cities such as Yancheng, Yichang and Zhangjiajie are also being explored.

Charter services are key to cultivate demand to new cities and pave the way for scheduled services, CAG said.

Jewel Changi Airport, a mainly commercial development with play attractions which will open this year, will augment Changi Airport's status as an air hub, he said.

T1's expansion will also be completed this year, increasing the airport's total handling capacity to 85 million passengers per annum.

Mr Lim said: "We expect 2019 to pose challenges include rising fuel prices and trade tensions. While these potential headwinds may impact the industry, demand for air travel in the Asia Pacific region is forecast to grow steadily.

"Together with our airport community and partners, we look forward to strengthening our connectivity and better serving our passengers' needs."