SINGAPORE - Most passengers departing from Changi Airport, which won its 500th best airport award in November 2015, can now check in at least four hours before their flights.

It is yet another improvement for the Singapore icon, which is already known for its comfort and efficiency.

Here are 12 other reasons why we love Changi Airport.

1. No queues on arrival

While you may want to linger in Changi Airport (for reasons stated below), there is frequently no need to, as you whiz from plane, through immigration, to luggage belt on arrival.

2. Smell the orchids and sunflowers

Terminal 3's transit area is home to the world's first butterfly garden in an airport, complete with lush greenery and a 6m-tall waterfall. As many as 1,000 tropical butterflies of 40 species can be seen, depending on the time of the year.

Yes, Changi Airport has its very own movie theatres - located in Terminals 2 and 3 - and they are free. Screenings are available around the clock and the latest films are usually shown.

An entertainment deck with Kinect stations and Xbox 360s is a nice refuge for gamers.

Join weary travellers at the snooze lounges for some shut-eye.

5. Kids can have as much fun as adults

Standing at 12m high (four storeys tall), The Slide@T3 is Singapore's tallest slide. It was closed for most of November for renovation and will reopen on Saturday (Nov 28).

If you are not keen on spending at least $10 in a single receipt for a ride down the silvery tube, wood block rubbing stations and well-equipped playgrounds scattered across all three terminals can provide hours of fun for children during a boring transit.

Terminal 1's piece de resistance are the twin Kinetic rain sculptures, made up of 1,216 bronze droplets, that can form different shapes ranging from art forms to patterns such as an airplane and a dragon.

There is also a super-sized saga seed by sculptor Kumari Nahappan and Han Sai Por's Floral Inspirations - a sculpture of two giant seed pods. Both can be found at Terminal 3.

7. It turns travellers into millionaires

"Be a Changi Millionaire" has seen several shoppers crowned millionaires overnight, including Singaporeans Ivan Rantung and Peh Hock Peng, who won the grand prize in 2010 and 2012 respectively.

This year's winner was Mr Seiichiro Oiyama, a civil engineer from Japan.

For each instalment, six finalists are picked from a monthly lucky draw held between May and October, and they take part in a series of games based on luck to win the grand prize of a million dollars.

To take part, shoppers have to spend at least $30 in a single receipt at Changi Airport or iShopChangi.com.

Looking for a quick bite or a proper meal? There are more than 120 restaurants, cafes and food kiosks to choose from. Take your pick, from fast food, local fare to Japanese ramen.

Changi Airport is so comfortable that three people have called it home for seven months this year. Miss Eileen Ho, her boyfriend Daniel Soo, and Ms Ho's brother Wilson told The New Paper that they moved into the airport after Miss Ho had a falling out with her parents as there is "free Internet, free electricity and free water".

Yes, Singaporeans love to travel, and more than 300 cities around the world are just a flight away from Changi. There are over 100 airlines operating from the air hub.

11. Scene of an epic proposal

A YouTube video of the event has since garnered more than 700,000 views.

12. It's where the Force awakens

Star Wars fans, the airport you cannot resist, as Yoda would say. 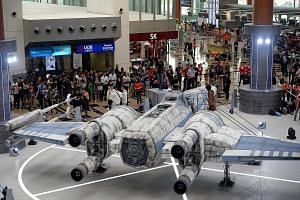 A life-sized X-Wing jet was on display at Terminal 3, while a scale model of the TIE fighter stood tall at Terminal 2 until January 2016.

The exhibits were part of a promotion for the newest instalment in the Star Wars movie series, The Force Awakens. The promotion was the latest in a series of themed displays that offered photo opportunities to visitors of the airport.