SINGAPORE - The root cause of Thursday's full-day glitch on the Downtown line - Singapore's newest MRT line - remains a mystery.

The line was affected by a fault with the signalling system - which determines the safe distance between trains - which lengthened journey times by up to half an hour.

The LTA and Downtown Line operator SBS Transit on Friday night said that "the fault was traced to a synchronisation issue between two sets of signalling equipment".

This triggered a speed restriction on trains passing the affected stretch.

While the immediate cause of the signalling fault has been resolved, LTA was unable to say what caused this glitch in the equipment.

"Siemens will continue its investigations into the root cause of the failed synchronisation of the signalling equipment to prevent a recurrence," they added.

When approached on Friday, German engineering giant Siemens, which supplied the signalling system, said it had already filed its findings to the Land Transport Authority (LTA) and added it was for LTA to release information relating to the incident. 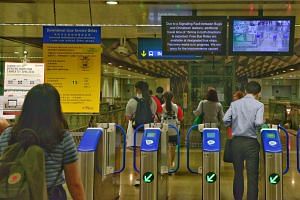 Downtown Line plagued by delays on Thursday due to signalling fault

Singapore Institute of Technology Assistant Professor Andrew Ng threw out some possibilities for the synchronisation problem.

Wayside refers to a point along the trackside which a train detects, and determines, among other things, where it should stop at a station platform.

Communications-based train control refers to the name of the signalling system.

Prof Ng however, was also unable to say what were the root causes of the failures.