The latest move by the Land Transport Authority (LTA) to turn to the Singapore Armed Forces (SAF) for help during massive train disruptions has raised some eyebrows. Many wonder if we want our fighting men and women to become marshals and direct stricken commuters at the MRT stations.

Given its vast experience in deploying large bodies of people and diverse pools of resources quickly and effectively, it would make sense to rope in the SAF to help ease the congestion during such incidents.

It is clear that the LTA and rail operators want to avoid a repeat of the July 7 massive breakdown which affected some 250,000 commuters during the evening peak hour.

There were accounts of people, whose trains broke down around 7pm, not managing to get home until close to midnight. Some had to walk all the way.

In the wake of the incident, a review was conducted that found SMRT's contingency plans wanting.

So it is not a bad thing to involve the SAF in planning for contingencies, especially in worst-case scenarios.

But calling in the troops should be the last resort and not a routine exercise in a breakdown.

That is because the primary mission for Singapore's soldiers, airmen and sailors is to fight increasingly complicated and difficult enemies.

Making them the go-to guys during large scale train disruptions would mean taking them away from focusing on training for the business at hand.

While the LTA is tight-lipped about when and how it plans to call in the troops, a few questions come to mind immediately: Should public transport operators, which are private corporations, tap on national resource to help sort out their problems? Should they have to pay for the use of such resources? While the rail business has not been doing well and suffering losses, a profit-driven firm should have the financial wherewithal to hire more auxiliary police officers or private security firms to get the job done.

In any case, how far will military presence on the ground go in easing the commuter's grief and inconvenience?

Commuters just want to know where to go, what buses to take and how to get their refunds. Such information can be simply presented in signs that commuters can refer to in the stations and hear from frequent public announcements, and by having enough staff - or even part-time marshals - on the ground. Soldiers aren't necessary.

To be sure, SAF personnel have made their presence felt in previous emergencies. They have swung into action, from coordinating screening measures during the Sars epidemic in 2003 to distributing one million masks when the haze blanketed Singapore in 2013.

With its proven track record, some analysts have rightly pointed out that the SAF is a shared national resource whose use doesn't have to be limited to just defence or security.

Elsewhere, militaries have also been called in to help in crises. British soldiers, marines and airmen were deployed as drivers when ambulance workers went on strike last October. In South Korea, some elite soldiers from the Special Forces have to learn how to drive trains in case the train operators walk off their jobs.

Thankfully, such scenarios don't play out in Singapore. Train breakdowns here have so far lasted for a few hours and not spiralled out of control.

But as defence analyst Ho Shu Huang said, a train breakdown could become a crisis "if there are other untoward consequences, such as a stampede, civil unrest or if the train breakdown continues for days or weeks".

It will then be justifiable for the military to support efforts to manage the crisis, he said. 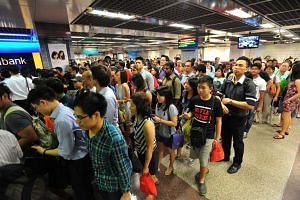 Talk of SAF helping out in rail incidents sparks debate 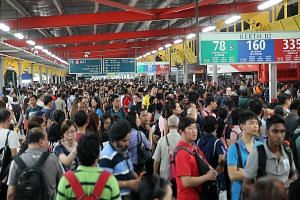 I agree. As former defence chief Lieutenant-General (Retired) Winston Choo once said: "Although our main task is the defence of the nation against external aggression, we must also be able to assist the civil authorities in any emergency that may occur... We must be absolutely reliable in times of crisis. Our role is not merely to defend and protect but also to assist in saving the lives of our fellow citizens."

That being said, managing crowds is a far cry from being caught in the heat of battle.

With falling enlistment rates, there will be fewer boots on the ground. The SAF needs to train up an army of war-fighters who can tighten their grip on their primary mission and not be distracted by mundane missions.