Singapore's biggest taxi operator is changing how much it takes from cabbies for ride bookings, causing many to wonder how it will affect their earnings from next week.

Starting next Tuesday, ComfortDelGro cabbies will pay a levy of 3.9 per cent for each booking that costs $12 or more, and no levy for bookings that are under $12.

These levies are charged only for rides booked through ComfortDelGro's phone and mobile app booking systems.

By waiving the levy for jobs below $12, ComfortDelGro hopes to encourage cabbies to take on jobs through its booking system, said spokesman Tammy Tan.

A letter sent to drivers, seen by The Straits Times, noted that ComfortDelGro loses "thousands of bookings" daily because drivers do not take on these jobs.

Commuters would have shorter waiting times if drivers took up more bookings, ComfortDelGro said yesterday in response to queries.

Cabby Chua Hwee Keng said he did not expect much change in his takings with the new levy.

"It will depend on the kind of jobs I get," said the 56-year-old, adding that about half of the booking jobs he takes are for fares below $12.

Others, however, were concerned the change would take a bigger bite out of their earnings. 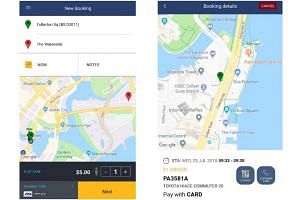 Veteran cabby Haniff Mahbob said he was still studying what impact the revised levies would have on his income. "The levies could be a lot higher than the 30 cents currently charged," said the 66-year-old, adding that most of the fares he takes from booking jobs are priced above $12.

National Taxi Association (NTA) executive adviser Ang Hin Kee said he was "very disappointed" at the move by ComfortDelGro, adding that he had spoken to cabbies about the change.

"Most said the trips they take from call bookings that are less than $12 are few and far between," said the Ang Mo Kio MP, noting that drivers are concerned that the company is profiting at their expense, as high taxi rentals and increasing fuel costs already take a significant chunk of their incomes.

The promised weekly incentives might also not make up for the loss in profits, he said, and such incentives could be temporary.

Mr Ang said the NTA would raise its concerns with ComfortDelGro, as well as the Land Transport Authority and the Competition and Consumer Commission of Singapore.